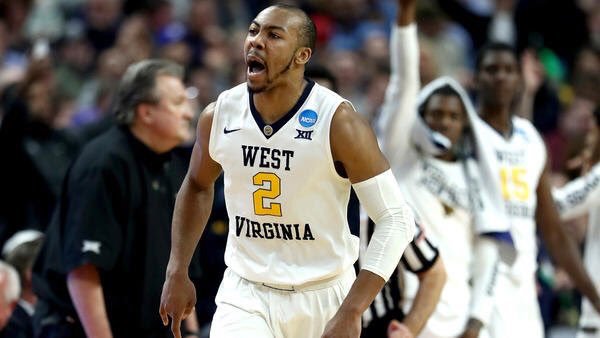 On Monday ESPN released their preseason All-America teams. ESPN snubs Big 12 Defensive Player of the Year and 2nd-team all-Big 12 player Jevon Carter on all four of the All-America teams they released.

Jevon Carter’s all-around game is very impressive. He handles the ball, shoots, defends and leads the Mountaineers. He led the team in minutes, points, steals, assists, 3-pointers made and free throw percentage. There is no weakness in Jevon Carter’s game.

Despite Coach Bob Huggins using a 10 or 11 man rotation, Carter was the lone player that Huggins was not willing to sit for an extended period of time. He led the team in minutes with 32.0 minutes per game. Only one other player averaged over 30 minutes and that was Nathan Adrian with 30.3 minutes per game.

Carter was the Big 12 Defensive Player of the Year. The fact that the conference gave the award to a guard speaks volumes to how great of a defensive player he is. Carter led the Big 12 in steals and was always called upon to defend the best guard on the opposing team. Press Virginia is one of the most dreaded tasks for college basketball teams across the country to encounter and Carter was a key cog in that machine.

Also, it’s not like Carter is the best player on a bad team. The Mountaineers are ranked #10 in the preseason Coaches Poll and predicted to finish 2nd in the Big 12.

Jevon Carter came up big when it mattered most. Who could forget when Carter piled in 24 points leading the Mountaineers to the Sweet 16.

It’s easy to make a claim that Carter belongs on one of these All-American teams without pointing out someone he should replace. I’d be glad to do that. Let’s start with someone on the first team:

Joel Barry II, senior guard from North Carolina. He averaged 14.7 PPG, 2.6 APG and 3.1 RPG. He outscored Carter by a hair, but that is the only category where he was better. While Barry was incredible leading the Tar Heels to the national title and being named Most Outstanding Player, the All-America teams should not be based off that alone. Jevon Carter is a better player than Joel Barry II.

ESPN may have snubbed Jevon Carter, but they showed plenty of love to other teams in the Big 12. Devonte’ Graham of Kansas was named to the third team. While their numbers are very similar offensively, Graham was nowhere near the defensive player Carter is. While Graham was riding the coattails of Frank Mason, Carter was leading his team.

Despite not being on any of these four All-America teams, Carter did make the watch list for the 2018 Bob Cousy Award.

Ultimately, these preseason All-America teams mean nothing. That said, you want to see a four year guy like Jevon Carter get the recognition he deserves. He’s a great player who handles himself with class. Whether Carter is an ESPN Preseason All-American or not, we will see big things from him this season. Maybe this will cause him to play with even more of a chip on his shoulder, if that’s possible.