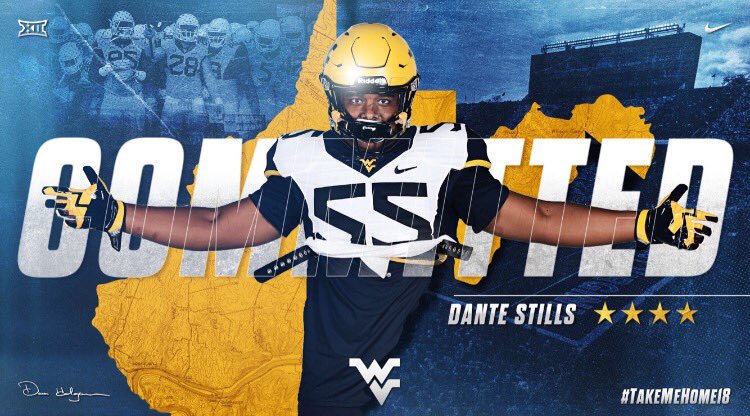 Stills was a four-star recruit that attended Fairmont Senior High School. If you aren’t aware that’s just a few miles down I-79 from Morgantown. He led the Polar Bears to the state championship game his junior and senior year, coming up short in both appearances.

His brother Darius is already a Mountaineer defensive lineman. Dante is the Stills brother that has the coaching staff and media buzzing. He is 6-foot-4 and 284 pounds. His athleticism and size should help him making an impact immediately as a true freshman.

ESPN complied a list of instant-impact freshmen for all of the teams in Mark Schlabach’s way-too-early top 25. Here is what they had to say about Stills:

Who doesn’t need a big man to rush the passer? Stills, at 6-foot-4 and 284 pounds, signed with the Mountaineers in December over offers from Florida, Georgia, Miami, Oklahoma and others. Defensive coordinator Tony Gibson noted that West Virginia could have used Stills against Utah in the postseason, so apparently, he’s ready to contribute immediately. Stills knows what to expect, as his father, Gary, played linebacker at the school and brother Darius already is a defensive lineman in Morgantown. — Sherman

It’s good to sign a recruit was targeted by teams like Florida, Georgia, Miami and Oklahoma. That’s the benefit of a legacy player. Brother Darius was a highly recruited defensive lineman that joined the Mountaineers just last year. The article mentions that Dante and Darius’ father Gary played linebacker for the Mountaineers. What it doesn’t mention is what an outstanding player Gary was for the Mountaineers. As a junior he had 12 sacks including a school-record 4 sacks against Marshall in the season opener. He earned all-Big East honors that season.

Gary Stills was drafted in the third round (75th overall) of the 1999 NFL Draft by the Kansas City Chiefs. He then went on to play ten seasons in the NFL for the Chiefs, Ravens and Rams.

Last season the Mountaineers ranked 72nd in the nation with 1.92 sacks per game. During Dante Stills’ senior year he had 6.5 sacks despite facing double and triple teams all season. This extremely highly-regarded recruit has the skills necessary to make an immediate splash and put some serious heat on Big 12 quarterbacks.

Check out some highlights from his sophomore year.

Here’s to hoping that in-state talent Dante Stills can help get the Mountaineer defense to the next level in 2018.