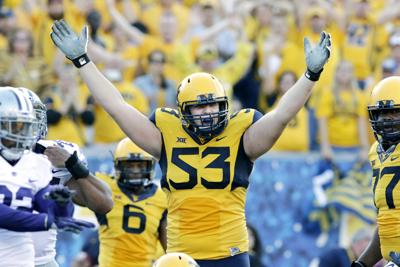 The ESPN Football Power Index has come out with their predictions for WVU’s 2019 season and they predict a sub-.500 year for the Mountaineers.

Chris Anderson of 247 Eer Sports reports the FPI has WVU favored in just two games next season, one being the opener against FCS team James Madison (76.7%) and the other being the now Les Miles-led Kansas Jayhawks (74.1%).

Granted, there a few games that are nearly coin flips, including the week three matchup with NC State (47.4%) and the week eleven game against Texas Tech (46.7%).

We know the 2019 WVU football team is going to have a lot of challenges in front of their success. Speaking with the media on June 20th, athletic director Shane Lyons pointed out some of those hurdles.

“(Neal will) talk about how our running backs are good, but we’ll be a little weak in a receivers’ standpoint,” Lyons said. “On the offensive line we can be OK if everybody’s healthy, but we don’t have a whole lot of depth.”

Lyons also made sure to praise Coach Brown’s effort since arriving at WVU. “There are some holes to be filled. But he’s filling those holes and building a great culture,” Lyons said. “Part of coaching is building that culture in the locker room. Talking to some of the student-athletes that are returning, they believe in Coach Brown and his staff.”

It’s natural that the athletic director would praise the new head coach whom he hired. It’s also reasonable that Lyons would set the bar of expectations low next season by pointing out the challenges and asking fans to be “realistic.” Even still, tangible goals are important to have. It’s likely that Neal Brown and company have such short and long term goals, such as making it to a bowl game next year, improving the win total in 2020 and eventually challenging for the Big 12 Championship.

Of course, WVU COULD end up shattering expectations right away. They could end up achieving way more than making it to a bowl in 2019. Remember 2016, when WVU has a ten-win season led by Skyler Howard? But Lyon’s point, a well-taken one, is to not expect such a breakout year and the FPI agrees. Rather, the message is seemingly to look toward the future and #TrustTheClimb.