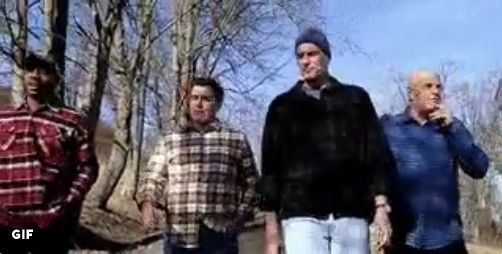 ESPN College GameDay is in Morgantown for the Saturday night showdown between West Virginia and Kentucky. To say Mountaineer fans are fired up would be an understatement.

ESPN put together an epic opening to their College GameDay program on Saturday, featuring Rece Davis, Jay Bilas, Jay Williams and Seth Greenberg walking through the woods singing “Country Roads” on their way to the Coliseum. You have to check it out.

What an open to @CollegeGameDay! pic.twitter.com/Ki0c0MIOZU

While both teams come into this game struggling, there is no shortage of excitement or buildup for this game. Mountaineer fans have been waiting 47 years to have Kentucky in their house and as no surprise this is a sellout.

Despite this, Bob Huggins is more worried about recent history. The Mountaineers have lost three of four and dropped in the Big 12 standings. Many of the struggles have came on offense. Wooden candidate Jevon Carter has been forced to jack up contested shots deep in the shot clock.

Over the last four games Carter has put up 73 shots. By far the most in his career during a four-game stretch. The length of Kentucky will be a challenge for Carter.

Kentucky was able to defeat Mississippi State by a final score of 78-65 and avoid a three-game losing streak. Despite this, the Wildcats are unranked for the first time since 2014. Even though the roster is chocked full of one-and-done type talent, this roster has not meshed as well as they have in previous season under Coach Cal.

“We’re one of those teams that’s a little bit behind –whether it be execution or toughness — but we’re trying to figure things out,” John Calipari said. “Thank goodness we’re still in January.”

Sagaba Konate will be giving up some size to the Kentucy trio of big men, Nick Richards, Sacha Killeya-Jones and Jarred Vanderbilt. Despite this Konate will surely make things tough inside for the Kentucky bigs with his energy and shotblocking ability.

If you still aren’t fired up for tonight’s game, maybe you should be a doctor. Or check out this Mountaineer hype video narrated by Bob Huggins.