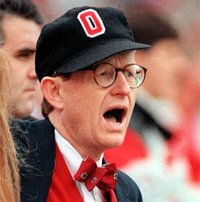 Nice. Seems to be a solid fit, has a history with WVU, and a big sport’s fan. We need to make sure that we have a sports friendly President at our favorite university!
Check it out:

The WVU Board of Governors made its choice in a closed door meeting Thursday but chose not to release the name until the state Higher Education Policy Commission approves the action at a meeting set for Friday morning.

There’s been considerable speculation pointing toward Gee, who most recently was the president of Ohio State University. He served as WVU’s president from 1981 to 1985. Before that, Gee was dean of the WVU College of Law.

BOG Chairman Jim Dailey II said after Thursday’s meeting he was very pleased with the results.

Could Oliver Luck be the next WVU President?
WVU Sees Financial Gains In Its Move To The Big 12 Conference