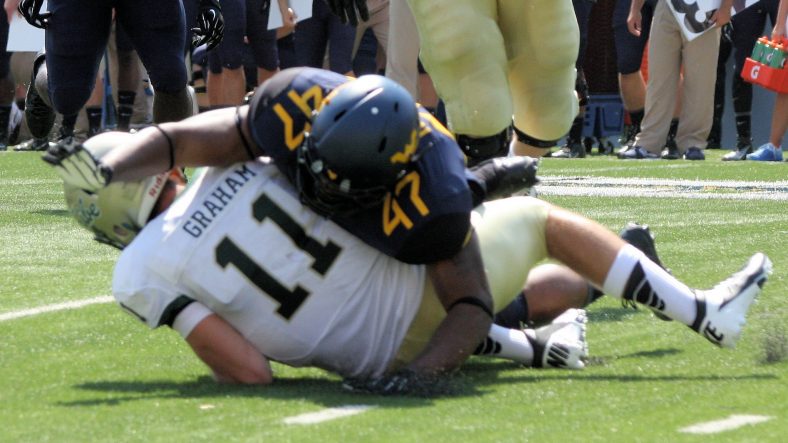 Glad he is taking his time to come back. We need him healthy this season!
Check it out:

Doug Rigg found out firsthand just how lethal Karl Joseph can be when he hits another player. Just an accidental collision from his fellow West Virginia defender sent Rigg to the ground and out of consciousness with a concussion and now the senior linebacker is acutely aware of what it’s like to be on the receiving end of that blow.

“I think I might be on his highlight tape,” Rigg said of Joseph. “I see why he hurt the guy from Texas last year. The guy can hit. The guy’s pretty good.”

Rigg can laugh about it now, but when the hit occurred, it was not an amusing moment. He hit the ground and was “out cold,” as his head coach put it later that night. The senior, one of the team’s leaders, lay on the field in Oklahoma as his teammates surrounded him, praying that he was not paralyzed from the hit he took.

“When I got hit, everything really just went black,” Rigg recalled. “It didn’t even feel like I was out. It just went black and I remember Dave [Kerns, WVU’s athletic trainer] over me, trying to wake me up. They told me I was out for 30 seconds. I didn’t know at all. It felt like I literally just got hit and somebody was talking to me. That’s all I really can remember.”