Does McCabe’s game have the steak to justify the sizzle? 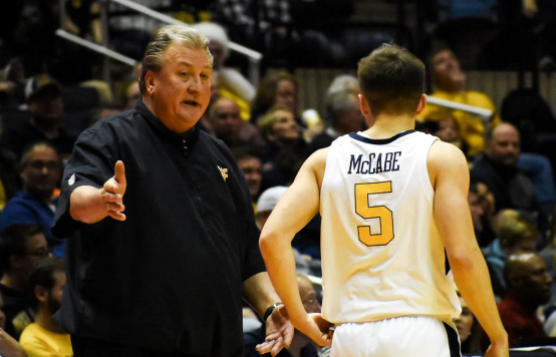 “McCabe was brought here to pass. He wasn’t passing. That’s why he didn’t play.”

That was West Virginia basketball Bob Huggins answer to a question about sophomore point guard Jordan McCabe’s lack of playing time in the Mountaineers 94-84 season-opening home win over Akron. McCabe, the breakout star in the second half of last season’s 15-21 debacle, played just nine minutes in the Akron win and only one minute after the half.

McCabe has ball-handling skills superior to any point guard Huggins has ever coached. McCabe’s skills in dribbling and passing a basketball made him a YouTube sensation before he was a teenager https://www.youtube.com/watch?v=ouR5g1QU6Bc. It was a skill set that led the undersized (5-foot-11, 187 pounds) point guard to garner Wisconsin Mr. Basketball honors https://usatodayhss.com/2018/jordan-mccabe-named-wisconsins-mr-basketball-for-2018

These skills had Mountaineers fans drooling about the prospect of McCabe’s magic on the Coliseum floor. And after a freshman first half that saw McCabe sit more than he played, in the second half of the season, McCabe became the de facto leader of a dysfunctional Mountaineer team that saw dismissals and departures. He was a driving force behind a late-season rally that saw WVU win two Big 12 Tournament games.

If excitement was high before McCabe’s arrival, it hit a fever pitch after his freshman season performance. It’s doubtful the opening-game benching tempered that much.

But (hopefully), this season’s team is different than last’s. It’s deeper. More athletic. More in line with the type of athlete and player Huggins is comfortable. Players unlike McCabe.

For all the flash and sizzle McCable’s ball handling entails, it doesn’t cover real holes in the sophomore’s game. And it’s possible – if not probable – that McCabe doesn’t have the physical skill set to fill those holes.

Huggins is first, last and foremost a defensive coach. It’s the backbone of his Hall of Fame worthy career. From the gritty Cincinnati teams of the 1990s that Huggins led to so much success (including a Final Four) to the Press Virginia teams of recent times, Huggins teams were known for two things – toughness and defense. To play for Huggins, you better be tough and you better defend.

It’s too early (and subjective) to say if McCabe has the toughness necessary to play for Huggins. That’s not the case for McCabe’s defensive game.

McCabe lacks the size and athleticism to be a shutdown defender. His on-ball defense has been and will continue to be exploited by elite Big 12 guards. While McCabe can work on technique to improve, he’s not getting any bigger nor any quicker.

Senior guard Jermaine Haley has seen playing time at point guard as well. He’s not anywhere near the ball handler that McCabe is. But at 6-7, Haley is far more distributive defensively. It’s not hard to envision a scenario where Huggins is willing to trade McCabe’s ball handling for Haley’s disruptive presence.

Same applies with fellow sophomore guard Brandon Knapper. The South Charleston native came in with nearly as much hype as McCabe, but hasn’t had nearly the same impact. However, he saw time against Akron and it’s possible Huggins prefers the superior quickness Knapper provides on the defensive end.

Maybe McCabe’s offensive skill set is so unique that Huggins is willing to go outside his comfort zone and give McCabe the majority of minutes. Haley and Knapper may have superior size and athleticism compared to McCabe, but McCabe clearly has the highest upside of the three.

It’s a Huggins’ question that McCabe will ultimately answer: Is there enough steak in the guard’s game to accompany the sizzle?