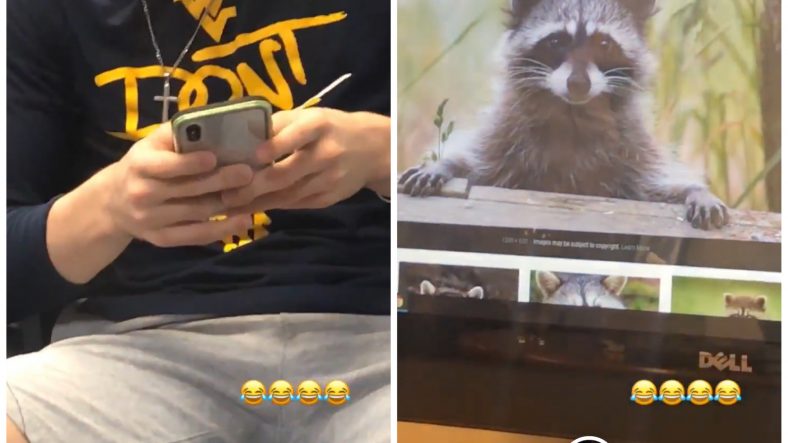 Jordan McCabe, WVU Freshman point guard sensation, showed tremendous growth on the court this past season.  He became the vocal leader of the team and the on-court general that Bob Huggins has been searching for since the departure of Jevon Carter.  McCabe seemed impervious to criticism of any kind because he is a tough, hard-working player that all West Virginians can embrace and love.  That is until last night.

It all started on Instagram with McCabe seemingly insinuating that teammate Emmitt Matthews Jr. resembled the super-intelligent alien supervillain, Megamind, from the Dreamworks Animation film “Megamind” by posting a side-by-side picture of Matthews next to Megamind.  It appeared to be an innocuous, harmless joke between two teammates at first, but Matthews, feeling burned by the joke and perhaps feeling there might be a little truth in McCabe’s comparison of himself to the animated villain, quickly struck back by claiming that McCabe has small hands and further, comparing those small hands to the paws of a raccoon.

One man suggesting that another man has small hands is taking it to another level entirely.  It’s one thing to compare someone to an animated film character, but discussing the size of another man’s hands is an unforgivable sentiment.  During the 2016 Presidential Election, Marco Rubio notoriously claimed that future President Donald Trump has small hands.  “He is taller than me, he’s like 6′ 2″, which is why I don’t understand why his hands are the size of someone who is 5′ 2″,” Rubio joked. “Have you seen his hands? And you know what they say about men with small hands — you can’t trust them.”

In response to this, a video titled “Release the Measurements” was created by “Americans Against Insecure Billionaires With Tiny Hands PAC” raising very serious concerns if Trump were to be elected with such small hands, such as “If the White House phone rings at 3AM, will his tiny hands even be able to pick up the receiver?” and “How can he create jobs if his hands are too small to shake on a deal?” and finally, “When he decides to launch a nuclear war, will his stubby fingers even be able to push the button down?”

Although McCabe had an outstanding end of the season and proved to be the leader of the team, the concerns about the size of his hands are real.  Can Coach Huggins trust the ball in his tiny hands at the end of a big game?  Do you want the game-winning 3 point shot coming off the hands of an individual potentially suffering from brachydactyly, a shortening of the fingers and toes due to unusually short bones?  In other words, it’s fine for our starting small forward to resemble an animated villain, but our point guard’s hands matter, and it’s important for Jordan McCabe to prove to West Virginians that his hands are normal size so that we can rest assured that the ball will be safe in his grasp.