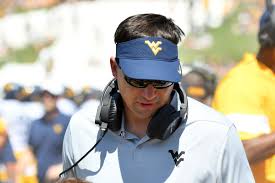 Following the Missouri game, Neal Brown, in a moment of rare candor, admitted, “I can handle losing.  I don’t like it but I can handle it.”

Brown’s record during his first year at Troy was 4-8 before going 10-3, 11-2 and 10-3 the next three years en route to bowl wins in each of those seasons.  This is truly year zero for WVU.  Brown has gone on ad nauseam about this year being a rebuilding season, a work in progress, repeatedly discussing the Mountaineers’ deficiencies.  We’ve heard the phrase “Trust the Climb” more in the past few weeks than we’ve ever wanted to hear it in a lifetime.

West Virginians are used to winning.  The football team has been surprisingly successful over the past 20 years.  The Mountaineers have only had 2 losing seasons in the past 18 years.  WVU went 3-8 in 2001 (Rich Rodriguez’s first year as the head coach) and 4-8 in 2013 (Dana Holgorsen’s second year in Morgantown).  Otherwise, it has been a mixture of above average seasons and outstanding ones.

Get your “Trust the Climb” shirt here.

The thing that makes losing so difficult for West Virginia fans is that there is not another team to cheer for other than the Mountaineers in our state.  If the basketball team fails (and it did last season) and the football season fails (and it is currently), there’s a whole year of suffering for a fanbase that lives and dies with its team.

It’s unlikely that Brown will completely turn around this team from year 1 to year 2 like he did with his first and second year teams at Troy.  This is not an immediate, fast build.  This is a slow rebuild and there will be another year of “trusting the climb” and perhaps another year after that.  Success will come if he’s given the opportunity, but the question is will he survive the heat from of a fanbase that grows restless with losing and a lack of immediate reward?

Does Brown’s “climb” have an expiration date attached to it?  How many years will West Virginia fans suffer through losing seasons and mediocrity before losing hope in “the climb?”

Get your “Trust the Climb” shirt here.