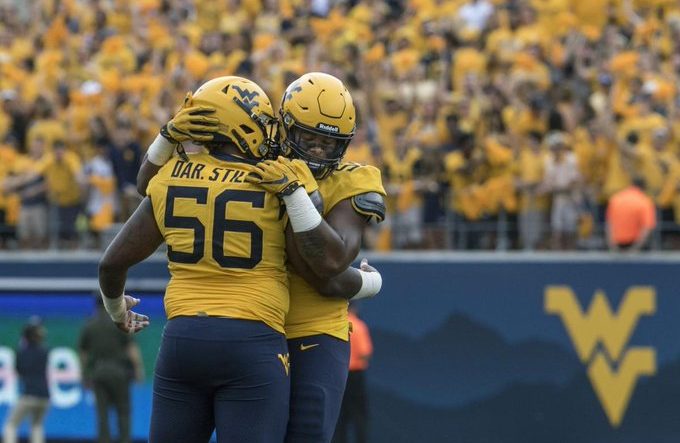 No. 11 Texas came into Mountaineer Field and put a stop to the “Horns Down” movement in Morgantown, piling up 42 points on the WVU defense.

Despite Texas scoring 42 points in the contest, you cannot put the blame on the Mountaineer defense.

West Virginia held Heisman hopeful Sam Ehlinger to 211 yards passing, his lowest total of the season. He was 18-of-33 with two touchdowns and an interception.

A combination of turnovers and the offense being unable to sustain drives wore down the Mountaineer defense in the fourth quarter.

In the third quarter during a break in the action, the Bill Stewart “Leave no Doubt” speech was played on the scoreboard. The fans were fired up and the defense came out and delivered when Keith Washington Jr. picked off Ehlinger and returned the ball to the Texas 14.

WVU corner Keith Washington had a nice day. 2 PBU and an INT. 6'1"/185lbs, so he could use a bit more weight, but he's got the frame for it. pic.twitter.com/niEjd6V0cm

The Mountaineer offense was only able to muster 2 yards and Evan Staley was able to make a 29-yard field goal, making the score 21-17.

On the next Texas drive, the Mountaineer defense was able to make another stop. West Virginia took over after a Texas punt from their own 8-yard line. On a third and one, Austin Kendall was picked off by B.J. Foster on third and one.

Texas took over on the WVU 18-yard line and was able to score a touchdown in just three plays with Devin Duvernay taking it in from 13 yards.

The next West Virginia drive resulted in ANOTHER turnover. After completing a 13 yard pass to Sean Ryan on the first play of the drive, D’Shawn Jamison picked off Austin Kendall and returned it to the WVU 33 yard line.

D'Shawn Jamison had two interceptions vs. WVU. Here's the other.

Ugly decision and throw from Austin Kendall, but the read and jump by young Jamison is something special.

This turnover was essentially what put the game away for Texas. The Horns went 33 yards in four plays and Samuel Cosmi scored on a 12 yard touchdown run, giving Texas a 35-17 lead and for all intents and purposes, sealed the win for the visiting Longhorns.

More Stories on WVU vs Texas:

The Mountaineer defense held a very strong Texas offense in check for three quarters. Hopefully the offense can improve, because this defense will give the Mountaineers the chance to win in most of their remaining games.

I say most because that trip to Norman is going to be rough.