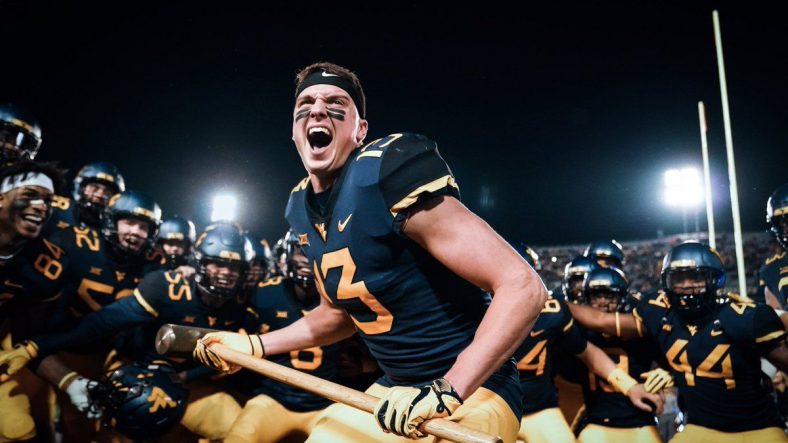 “It is mine to avenge; I will repay. In due time their foot will slip; their day of disaster is near and their doom rushes upon them.”

Make no mistake about it, David Sills V was disrespected by every team in the NFL.  Even the Buffalo Bills, who eventually signed him as an undrafted free agent, disrespected him.

The fact that the he managed to fall out of the draft entirely was/is stunning, but Sills is not focused on that and neither should we.

The awards and achievements while at WVU are endless:  Two-time All-Big 12 First Team Selection, AP All-American 3rd Team, WVU Offensive Player of the Year, Leader in Big 12 and 2nd in the nation with 15 touchdowns, 35 career receiving touchdowns are 2nd in WVU history, etc., etc., etc.  All of that recognition is meaningless in the NFL and he will have to prove himself all over again.

He will prove them wrong and he will earn his respect.

According to Matt Parinno of NYUP.com, ” Brown is the odds on favorite to be the Bills No. 1 receiver and Beasley should handle all slot duties. After that, it’s anyone’s guess how things will shake out. Jones looked great at times in 2018 but needs to make a bigger jump this season to grab consistent high-end snaps. Foster popped in 2018 but with film out there now he’ll be appearing on opponent’s defensive game plans.”

In other words, the door is wide open for Sills.  Sills, who has only played two years as a wide receiver, will have a lot of work to do to bypass the competition on his team and get playing time early.  Making it and succeeding in the NFL will be a grind for him.  Perceived weaknesses of his like, “unable to get free from tight man coverage” and “lacks top-end speed to separate” will be his focus and he will improve greatly in those areas during the offseason.  Again, the fact that he led the nation in receiving touchdowns over the past two years means nothing now.

David Sills will have to prove every team, including his own team the Buffalo Bills, wrong and will he ever prove them wrong.  Vengeance is His and He Shall Repay every team for their lack of judgment and intelligence by reigning down on every secondary and defense in the NFL!