David Sills V Gets Back to a Familiar Place 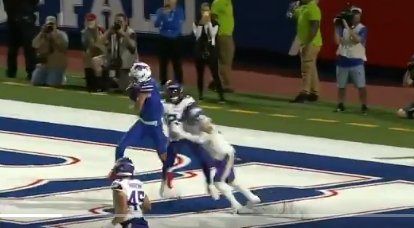 While playing at West Virginia, David Sills V was an absolute touchdown machine. In just two seasons, Sills had 33 touchdowns for the Mountaineers.

After all of his touchdowns in a Mountaineer uniform, it took him surprisingly long to find pay dirty while in a Buffalo Bills uniform. Well, on Thursday night it finally happened. And it couldn’t have came at a better time, with Sills battling for a roster spot.

With the Bills trailing by a score of 23-20 and time running out, David Sills V hauled in an 8-yard touchdown pass to give the Bills the lead and ultimately the win.

In the game Sills had two catches for 14 yards. Will this be enough to make the roster? At this point he might be destined for the practice squad, but this at least gives him a chance.

No matter what Mountaineer fans will be pulling for David Sills the whole way. It’s pretty incredible he’s only been playing wide receiver for a couple years and has made it this far.