David Sills Is Back And Dominating 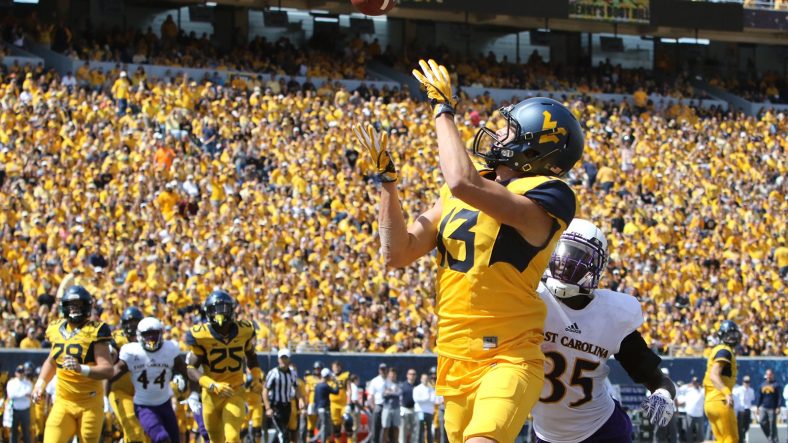 When David Sills V decided to transfer back to West Virginia after a year at El Camino College, it wasn’t met with much fanfare. Sometimes it’s good to be wrong. He now leads the nation in touchdown catches.

In week 1, Sills had 2 touchdowns against Virginia Tech. His encore was a 3-touchdown game against East Carolina. If you’re keeping score at home that gives him 5 touchdown catches on the season and ties him for the lead in the country with Courtland Sutton of SMU and Darren Andrews of UCLA.

The 7 catches for 153 yards bumped him up to 16 catches for 247 yards on the season. Now that Sills has committed to the position of wide receiver, he is dominating. After spending a year away at El Camino College in Torrance he has came back and made a major impact at his new position in a short time.

It’s understand able why he was not quick to give up his quarterback dream. Don’t forget Lane Kiffin offered him a scholarship to play quarterback at USC when he was in the eight grade in 2010 when he was only 12 years old.

Things didn’t go as expected. Sills didn’t develope as they hoped at USC. Lane Kiffin was no longer the coach. USC moved on to other recruits that developed better. WVU gave him the chance to compete for a starting job under center. Of course that didn’t pan out either and he was shifted to wide receiver. He took one last shot at quarterbacking at El Camino College in Southern California, but now he’s back for the Mountaineers and dominating at wide receiver.

Catch Sills in action Saturday against Delaware State where the Mountaineers are slated for a noon kickoff in Morgantown.