Dante and Darius Stills Have Arrived 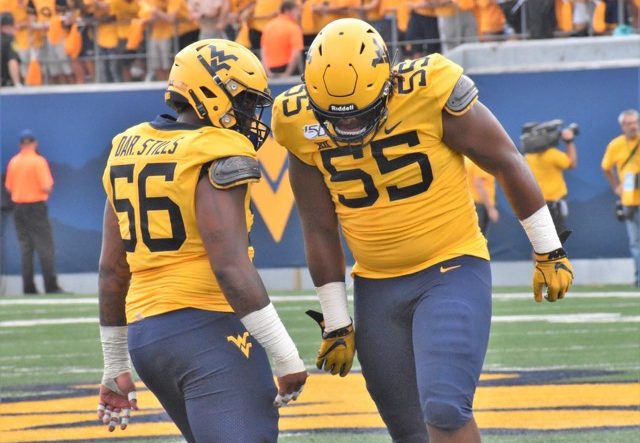 Coming into this season, any success the WVU defense was going to have was going to based on the success of Dante and Darius Stills. Saturday’s win over North Carolina State proved that to be true.

It didn’t take long for true sophomore Dante Stills to make his presence felt. On the first defensive snap for WVU, Stills stormed into the backfield and tackled the running back for a loss. It was waved off due to a pre-snap penalty, but either way this established how things were going to be during this game.

Dante had two sacks, including his second one where he came free on a defensive line stunt between him and his brother Darius.

How did Dante get such a clear path? His brother Darius. In fact, Dante told the reporters exactly that after the game. And Darius couldn’t be happier to see little brother succeed.

Turns out @DariusStills56 had a little something to do with @DanteStills' 2nd HUGE sack…
Is there a better pair of brothers than these two!? pic.twitter.com/vtuwISKQe4

Dante had two sacks for the Mountaineers, pushing his total to three on the season, matching his total for the entire 2018 season. Darius contributed with two big tackles for loss.

What makes this even better as that these young men are proud West Virginians. They come from a quick 20 mile trip down I-79 from Morgantown to Fairmont. Their father Gary Stills was a Mountaineer who went on to play in the NFL. If you follow this website then you’ve heard that story a million times, but I will never pass on the opportunity to tell it. It is a family of proud Mountaineers.

Jovani Stewart was a man possessed for the Mountaineer defense. He had seven tackles and assisted on a tackle for loss. After being out of position at outside linebacker last season, Stewart is back at home playing safety and is making plays in the running and passing game.

With the turnover in the secondary, it has been long projected that any success for the Mountaineer defense would hinge on a pass rush, led by the Still brothers. Against the North Carolina State Wolfpack, Darius and Dante delivered, slowing down a passing attack that had shredded through their first two opponents.