Dana to get a Dose of Reality 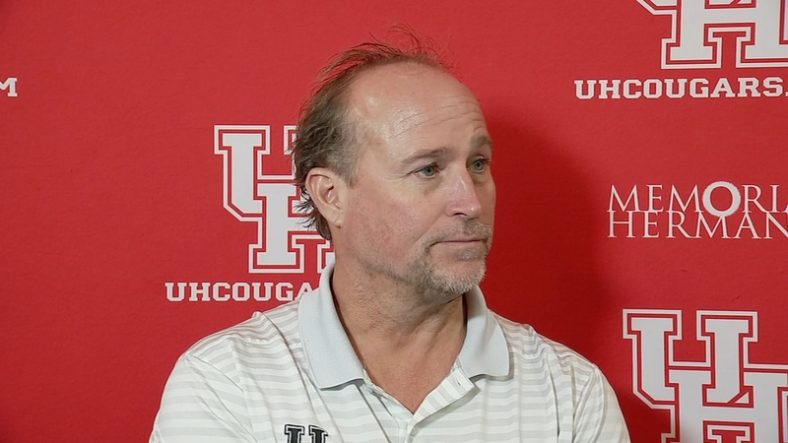 “I left West Virginia for a whole bunch of different reasons.  Houston is home, the University of Houston is a great place, it’s got tons of potential and we’re going to make it as great as we can possibly make it, but the other side of it is I could never beat Oklahoma.  That’s the only school in the Big 12 where we could never get over that hump. We lost 59-56 this year, and I’m like, ‘I’m outta here.’

In his very first game as the Head Coach of the Houston Cougars, Holgorsen plays against…the Oklahoma Sooners in Norman.  Houston enters the game as 23.5 point underdogs to the #4 ranked Sooners, but that didn’t stop Dana Holgorsen from having all of the confidence in the world and making outrageous claims about his team’s chances of winning in their season opener.

“We embrace these expectations.  Our job is to bring championships.  We start in Norman, Oklahoma and we can’t wait to go up there and play those guys and bring back a victory.  There’s no question about that.”

Houston coach Dana Holgorsen: ‘We embrace these expectations. Our job is to bring championships.’ He adds: ‘We start in Norman, Oklahoma and we can't wait to go up there and play those guys and bring back a victory. There's no question about that.’ pic.twitter.com/6FpjBDinyE

Holgorsen truly believes that he has a better chance of winning a national championship in Houston than he did in Morgantown.  His reality has been so far distorted that you truly have to wonder and worry about his sanity.  While he never exhibited the same confidence in his teams while at WVU, Holgorsen truly believes that he can not only take an 8-5 team from last year that lost an awful lot of talent and beat Oklahoma in Norman but also win every game that his team plays this season on way to “championships.”

When Holgorsen’s team take the field in Norman, it will be a huge wake-up call for the diminutive Head Coach of Houston.  Holgorsen complained about not being able to beat Oklahoma with the talent that he had in West Virginia.  In Houston, he will have far less talent and playing Oklahoma should immediately serve as an awesome dose of reality.