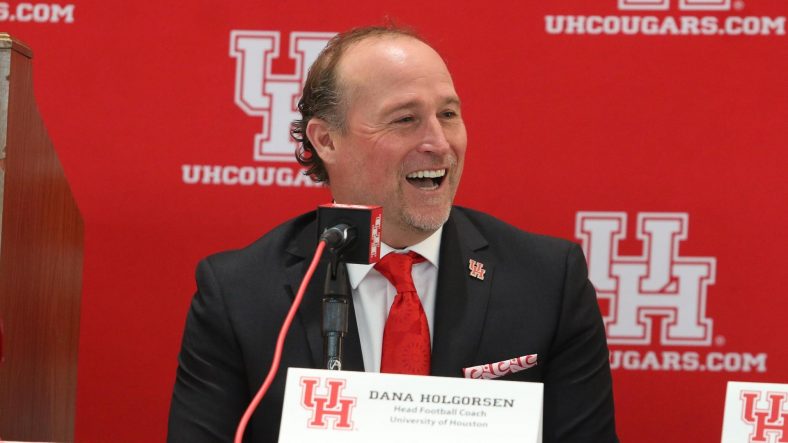 Dana Holgorsen, with all his mighty big talk about recruiting and West Virginia’s inability to attract recruits capable of winning the Big 12, has severely underachieved in his first offseason with the Houston Cougars.  Holgorsen’s quote to Sports Illustrated, “We weren’t going to get high school kids at West Virginia that we were going to win the Big 12 with”, didn’t sit well with West Virginians and it appears that Holgorsen’s recruiting struggles have continued in Houston.

Houston’s 2020 class is ranked 91st overall and ranked 73rd the previous year.  In addition, Houston is currently ranked 10th in the American Athletic Conference.  For a university that is attempting to make the big jump to become a Power 5 Conference school, finishing 10th in the AAC in recruiting is particularly telling.

Houston lost their top-ranked prospect, Quinten Dormady, a 6’4 222 pound 4 star quarterback from Boerne, Texas, when he transferred to Central Michigan.  Houston originally signed 14 players for the 2019 class.  Of the 14 recruits, only nine remained after Holgorsen was hired.  As we’ve seen at WVU this offseason with several transfers, players often leave when a new coach comes to town, but Houston’s ratio of players leaving is particularly high.

Houston’s current 2020 recruiting class has 5 hard commits with an average rating of 0.8579, according to 247 Sports.  Reginald Johnson, a 3 star wide receiver from Baton Rouge, Louisiana, appears to be the gem of the class so far.  He is the 464th overall ranked player in the 2020 class.

It does seem that Holgorsen has learned from his mistakes while at West Virginia.  While Holgorsen did not pursue top-level talent in-state, he has gone on an all-out recruiting blitz on Houston-area high schools, according to a recent article from the Houston Chronicle.  Holgorsen and ten members of the University of Houston football coaching staff ride around to area high schools in an passenger van and form relationships with as many Houston high school players as possible.

Holgorsen was quoted as saying, “I’m going to visit as many high schools as I possibly can to rekindle relationships and build relationships with the ones I don’t know.”  Unfortunately for Holgorsen and the Houston Cougars, his efforts have not netted any commitments from Houston-area recruits yet.

Although it could be argued that Holgorsen got a late start in recruiting for the 2020 class, he has never proven to be a great recruiter and certainly should not comment on West Virginia University’s ability or inability to land top recruits based on his own lackadaisical effort.  Neal Brown, whose 2020 WVU class currently ranks 51st overall nationally, has shown that you can bring in big-time recruits to Morgantown.  Losing 4 star defensive lineman Aaron Lewis to Michigan hurt, but it showed that it is possible.

In addition, his commitment to keeping in-state players home will work, but he needs time to make it happen.  He has found a strategy that Holgorsen failed to do in his 8 seasons while at WVU.  Rather than making excuses about the difficulties of getting recruits to Morgantown like Holgorsen did, Neal Brown will find a way to make it happen.