Dana Holgorsen Reveals His Thoughts on WVU in Interview with SI 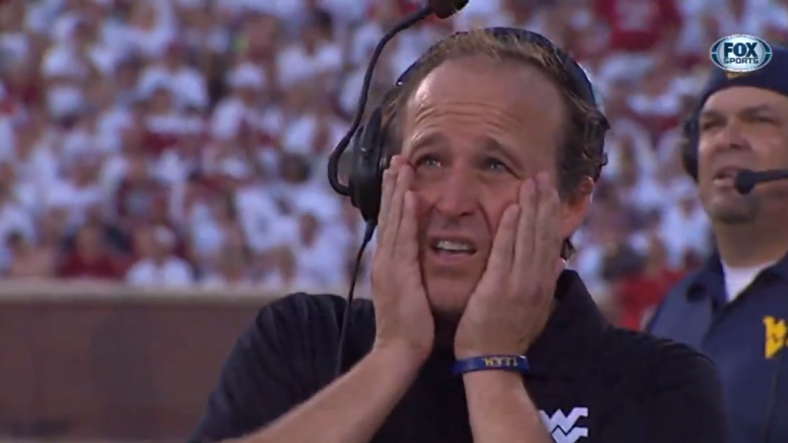 When Dana Holgorsen left for Houston, it happened so quickly there wasn’t much time for either side to respond. Holgorsen had to get busy recruiting in Houston. WVU Athletic Director Shane Lyons had to get busy finding his replacement.

Now that some time has went by West Virginia University and their fans are very happy with new coach Neal Brown. He brings a wholesome, all-in attitude that was lacking under Holgorsen. And of course Holgorsen seems happy in Houston. And in an interview with SI, Holgorsen reveals why he was happy to leave WVU behind.

Dana Holgorsen's return to Houston is about more than his ceiling at West Virginia or the Cougars' championship expectations. It's also about his love for a city that fits him https://t.co/EIFmQKqETG

Since guiding the Mountaineers to a loss in the 2018 Camping World Bowl, Holgorsen has not set foot in West Virginia. After the loss he vacationed with his three children in Florida before being picked up in a private jet by Houston Rockets owner Tilman Fertitta. The rest, as they say, is history.

Holgorsen left a Power 5 conference to become a Group of Five coach. He is making the same amount of money he was set to make in Morgantown. He never even told AD Shane Lyons about the negotiations. “This was never a play for more money,” Holgorsen said.

Of course Houston is doing this to make a splash and get the Power 5 invite they are craving. They are hoping Dana Holgorsen can do what Major Applewhite couldn’t and generate serious excitement among the alumni and students.

Then why couldn’t Holgorsen win at WVU? If he is the next-level coach the Cougars crave, why didn’t he have more success in Morgantown?

According to Holgorsen, the surrounding talent plays a big role in why he didn’t have success. From 2008 to 2017, the state of West Virginia produced 28 Power 5 signees. During that same time period, Houston cranked out 211 of them. Holgorsen leans on that as the reason why he couldn’t overtake Oklahoma at the top of the Big 12. A mix of local products, transfers and Texas guys was enough to win the Big East. But once WVU moved to the Big 12 that wasn’t going to be enough.

“We weren’t going to get high school kids at West Virginia that we were going to win the Big 12 with,” Holgorsen said in the interview with SI.

After dragging his parents across the country to Morgantown, now he is hoping to get them to Houston. The only problem is they have fallen in love with Morgantown. His two daughters have stayed back with their mother in Morgantown. His son, Logan, is a walk-on freshman quarterback at the University of Houston.

Back on April 8, the Houston Astros did their part to build up the excitement for new Cougars coach Dana Holgorsen and had him throw out the first pitch.

After the game a very interesting event transpired at an open-air bar across from Minute Maid Park. While he’s hanging out at the bar with friends “Country Roads” began to blare through the speakers, causing many people to laugh. It was at that point when Holgorsen looked around the half-empty bar and said to his friends, “That’s my cue to leave.”

That wasn’t the first time Dana Holgorsen correctly picked up on his cue to leave.