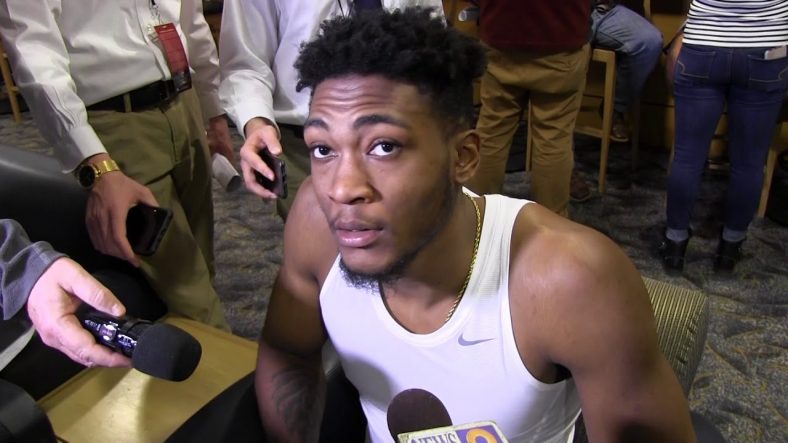 Head Coach Bob Huggins has huge hopes for his Mountaineers this season, but prognosticators, coaches and “experts” continue to disrespect West Virginia.  With the basketball season only a mere few weeks away from beginning, the Big 12 coaches voted on the league’s preseason awards.  While Oscar Tshiebwe, West Virginia’s Freshman sensation, was named the “Freshman of the Year”, Derek Culver did not make the All Big 12 team.  Instead, he was given an “Honorable Mention” by the coaches, who were unable to vote for their own players.  Derek Culver is the best returning player in the Big 12 and an “honorable mention” is an absolute slap in the face.

Derek Culver, the 6’10 255 pound Sophomore, was a dominant force as a Freshman last year.  Culver, a double-double machine, averaged 11.5 and 9.9 rebounds per game and will almost certainly improve on those numbers next year.  It appeared at times that he could not be kept off the offensive glass and his best days are in the future.

Talen Horton-Tucker, the 6’4 former guard for the Iowa State Cyclones, is gone and now playing for the Los Angeles Lakers in the NBA.  Jaxson Hayes, the Big 12 Newcomer of the Year last season for the Texas Longhorns, was the 8th overall pick in the NBA Draft and now plays for the New Orleans Pelicans.

Culver, with several of the league’s top players moving on, is now poised to be one of top returning players in the league, if not the very best.  Some other likely contenders for Player of the Year in the Big 12 include:

Desmond Bane, a 6-5 TCU Senior guard, tested the waters of the NBA but ultimately decided to return to the Horned Frogs.  Bane averaged 15.2 points, 5.7 rebounds and 2.4 assists.

Davide Moretti, a 6’2 Junior guard, will return to Texas Tech next year.  He averaged 11.5 points, 2.1 rebounds and 2.4 assists per game for the NCAA Championship runner-up Red Raiders.

Brady Manek, the Oklahoma Sooners Sophomore forward, showed flashes of brilliance, particularly in the Coliseum against the Mountaineers where he scored his career-high 22 points.  He averaged 12.2 points and 5.9 rebounds per game last season.

Tristan Clark, a 6’9 Junior Forward for Baylor, averaged 14.6 points and 6.3 rebounds per game.  Although he is talented, it’s unclear why he would be named to the All Big 12 team ahead of Derek Culver.

Kansas has several options that could step up and lead the Jayhawks this year.  Udoka Azubuike, the 7’1 Senior Center, was named the Preseason Big 12’s Player of the Year.  Azubuike could be dominant, but he’s had a very difficult time staying healthy for an entire season.   Kansas also features Devon Dotson, a 6’2 Sophomore guard, who averaged 12.3 points a game last season and will be the Jayhawks’ featured front court player this year.

This brings us to Derek Culver, West Virginia’s man-child who, despite missing the first 10 games of the season due to disciplinary reasons, proved to be one of the best interior players in the Big 12 last year.  Bob Huggins, in an interview with WV MetroNews last season, said of Culver:  “Derek doesn’t have a clue. It’s amazing he gets done what he gets done, because he doesn’t have a clue. If he will listen and put the time in and work at, he will be good.”

In other words, Derek Culver was relying on pure natural ability and athleticism last year.  With a year behind him, a summer in the weight room, and starting the season with the rest of the team next year, his potential is limitless.  Combining with newcomer Oscar Tshiebwe to form the best interior combo in the Big 12 and perhaps the country, Culver has a real opportunity to become the Big 12’s Player of the Year in 2019-2020.