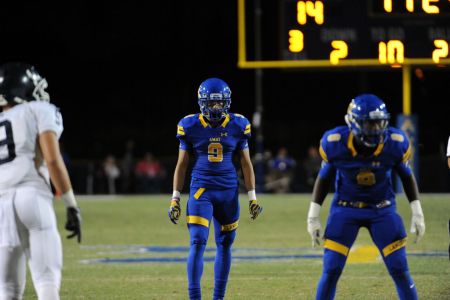 Noah Guzman, a strong safety who played last season at Cerritos College in Norwalk, California, may well be headed to WVU in time for the 2019 season.

The six-foot, 205 pound sophomore is reportedly “excited about an upcoming official visit to Morgantown,” according to Keenan Cummings of WV Sports Dot Com.

While a freshman at Cerritos College, Guzman racked up 74 total tackles, averaging 6.7 tackles per game to go with two interceptions and a forced fumble. Guzman saw action in 11 games.

Showing his versatility, Guzman played both receiver and defensive back at Bishop Amat High School. He earned 783 receiving yards and seven touchdowns during his senior year and was an all-area selection at defensive back as a junior per Cerritosfalcons.com.

The potential arrival of the La Puente, California native may help alleviate some of the concern Mountaineer fans have had over the departures of several safeties (including Kenny Robinson, Derek Pitts and E.J. Brown) within the last few weeks. Guzman can contribute immediately in 2019 by adding depth to the position.

Guzman has already took unofficial visits to both San Diego State and Arizona State this spring. Even still, the signs point to a Guzman-WVU commitment being on the near horizon.