Coming out of his Shell 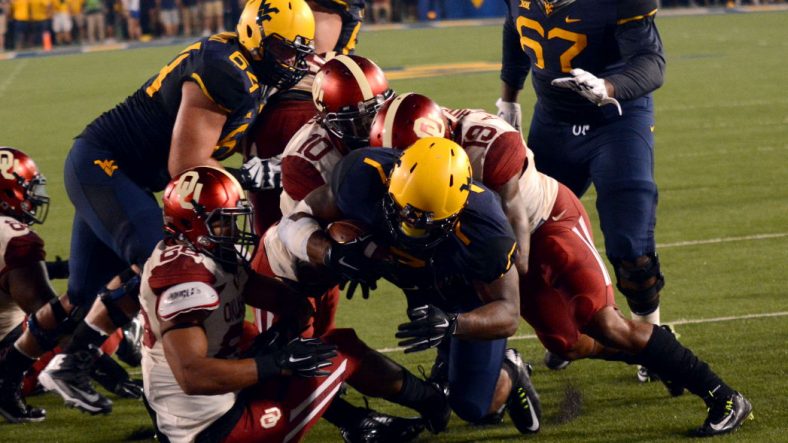 West Virginia notched its first Big 12 conference win of the season on Saturday, defeating Kansas by a score of 33-14. Clint Trickett passed for over 300 yards for the 5th time this season, tallying 302 yards on 20-35 passes and 1 touchdown. Additionally, the Mountaineer defense was stellar in holding the Jayhawks to 176 offensive yards. Their 14 punts amounted to both WVU opponent and Big 12 conference records.

Perhaps the most impressive aspect of the Mountaineers’ offensive attack on Saturday was the ground game. The team amassed a season-high 255 yards rushing. Sophomore running back Rushel Shell led the way with 113 yards on 21 carries, the first time he has eclipsed the 100 yard mark this season. Overall Shell is pleased with his performance, but he feels that he still has room to grow as a player.

“I thought it was fairly decent, but I feel like I’m still not at my full level where I can be at,” Shell said. “I’m going this week and trying to improve on the little things I messed up in the game, and I’ll get ready for Texas Tech.”

Utilizing the running game is nothing new to Dana Holgorsen, though. While popular belief might be that his offensive production is solely based on airing it out, reality is much simpler: he believes in taking what the defense offers up.

“It’s a cat and mouse game. If you’re able to do both [run and throw], then it becomes getting a bead on what their plan is… It’s all about dropping in coverage and giving you a weak box. Or, coming toward the line of scrimmage, and giving you a heavy box. Then you have to be able to figure out how you attack it. If they’re going to give us a weak box, we’re going to run it a bunch. If they’re going to give us a heavy box, we’re still going to try to run the ball a little bit. We’re just not expecting 10 yards a pop.”

Next up is a trip to Lubbock to take on Texas Tech. The Red Raiders have been in a major slump recently, losing their last three games to Kansas State, Oklahoma State, and Arkansas. Additionally they have lost their last seven Big 12 games dating back to last season. The game kicks off at noon Eastern on Saturday, and it will be televised on Fox Sports 1.