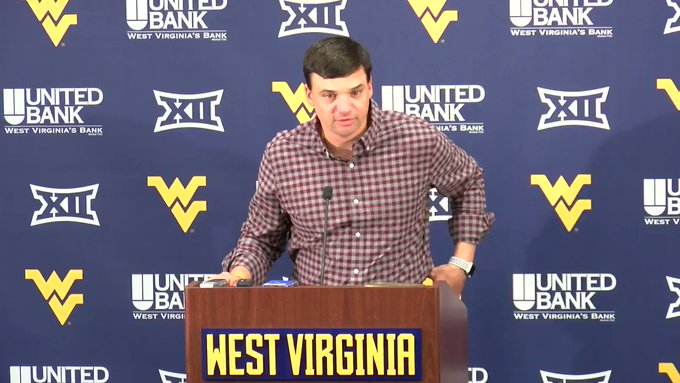 Roane County high school football player Alex Miller collapsed and died on the field in Clay, West Virginia on Friday night. After being taken to a local hospital he was pronounced dead.

WVU head coach Neal Brown went the extra mile and made sure everyone in Roane County knows that Alex Miller is in his thoughts and prayers. Coach Brown joined many in West Virginia and wore maroon-and-gray in order to take part in the statewide “Maroon Out” to show  support for the school. Since Brown wore these colors at Troy, this made it very easy for him to wear these colors.

“On behalf of our football program, I want to offer our condolences to the family of Alex Miller and his friends, teammates as well as everyone in Roane County,” Coach Brown said, per WV Metro News. “Our thoughts and prayers are with them. It’s a really sad event. I wanted to make sure everyone in Spencer and Roane County knew that we are thinking about them.”

“It’s just a tough deal,” the WVU head coach said. “I read about it and have been following it, and obviously that’s why I broke out some old Troy shirts today to have maroon on. It’s a sad deal all the way around.”

Brown has attempted to contact Roane County coach Paul Burdette, but as of Tuesday morning he had not yet heard back. Without giving too many details away, Brown said the program “has some things planned out” in order to help Roane County make it through the grieving process.

#WVU Head Coach Neal Brown offered his sympathies and condolences to the Roane County community after the death of Alex Miller: #wvprepfb pic.twitter.com/HmUDcFZm3V

It’s great to see Neal Brown go above and beyond what a coach would normally do and show true compassion for Alex Miller, his family and Roane County.

Thoughts and prayers to the family and friends of Alex Miller, as well as Roane County.