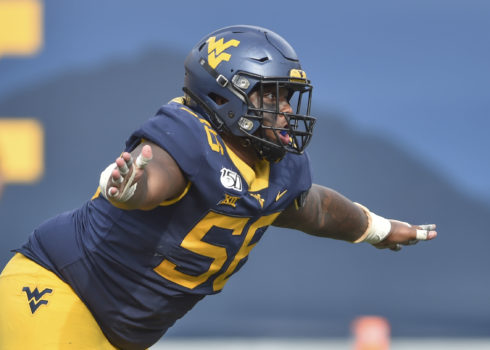 With the Stills brothers on the defensive line, there is some serious homegrown talent getting after the passer for the Mountaineers. Older brother Darius Stills is starting at nose guard and showed on Saturday that big brother is ready to ball in 2019.

Darius Stills came up with a big sack to help close out the win against James Madison.

That wasn’t the only big play made by the older Stills brother. With James Madison looking to extend their lead to a touchdown with a chip shot field goal, Stills burst through and blocked the field goal, giving the Mountaineers momentum.

✋? Darius Stills blocks the James Madison field goal attempt and the Mountaineers take over! JMU leads 7-3 with 6:21 remaining in the first half. pic.twitter.com/17arjwSKWT

Count Neal Brown as someone who is not surprised by the play of Darius Stills. He pointed out that #56 benefited from the change in defensive schemes as much as anyone. What the defense is doing now really allows him to showcase his talent, according to Coach Brown.

Darius Stills finished the game with six tackles, a sack and a blocked field goal.

Dante Stills also did his part in the defensive effort. He had three tackles including two for loss and a sack.

After the game, Dante did his part in leading the tradition of singing Country Roads after a Mountaineer win. Something the local talent knows plenty about.

You sang Country Roads, you captured the moment on your phones, YOU are the stars of the greatest tradition in college sports! ?? pic.twitter.com/ybPbniHDBQ

The WVU defensive line played a big part in the win, with a total of four sacks. Outside of the sack by the Stills brothers, the other two sacks were by a pair of players who transferred in and were in their first game in Mountaineer uniforms. Taijh Alston and Reuben Jones each notched a sack in the win. Alston transferred from East Carolina and Reuben Jones is a graduate transfer from Michigan.

More articles on the Stills Brothers:

Up next the West Virginia defense will have a bigger challenge against Missouri, who is led by former Clemson quarterback Kelly Bryant. In his one year as the starter, Bryant led Clemson to an appearance in the National Championship against Alabama.

The Tigers are coming off of a loss against Wyoming. In the loss Bryant threw for a career-high 423 yards.

This is a big-time challenge for the Mountaineer defense and the Stills brothers will be fired up to get after Kelly Bryant.