A Closer Look at the Start of the Neal Brown Era 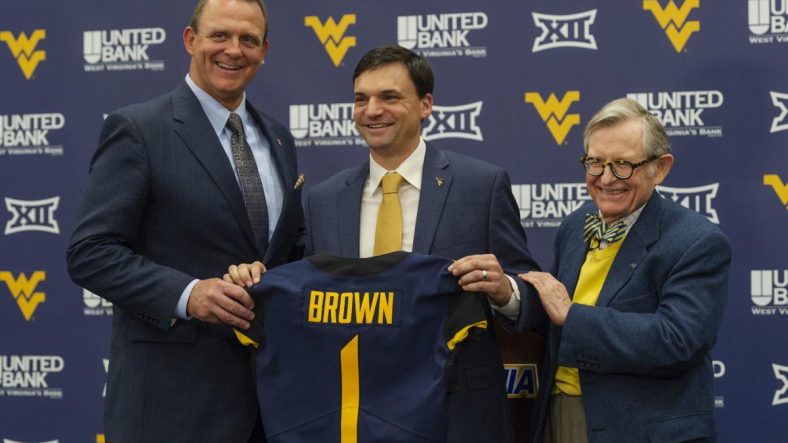 For a new father, the birth day of a baby is an almost surreal experience draped in positive glow and joy (sorry, moms, your experience that day is coupled with, shall we say, some “discomfort”). The excitement, The anticipation. The limitless hope.

But that day is followed by the eventual return home. And the tails side of that heads side of rainbows and unicorns coin is flipped. The sleepless nights. The crying. The wailing. The mess (oh the mess). The confinement. The work. The struggle.

For college football fans, this is what their team hiring a new coach is like. With the announcement and introductory press conference, fans are like a beaming new father. Feelings fill the heart as fans hear their soon-to-be savior stands at the podium in front of a curtain, emblazoned with the school’s (and whatever corporate entity ponied up the GDP of a small island nation) logo and talks about goals, accountability, doing things “the right way” while praising the school, the state and its fans. During this time, nothing feels out of reach. No dream unattainable. No mountain too tall.

But as with the newborn baby, then comes the return home. The wake-up call. Back to reality. Up until about two weeks ago, West Virginia fans were still new fathers in the hospital in regards to the hiring of Neal Brown. Now the 3 a.m. feedings are kicking in.

Since the break of spring practice, Marcus Simms (their best returning receiver), Dontae Angus, Tyrese Allen and Luke Hogan have all entered the NCAA transfer portal with plans of leaving. Departed coach Dana Holgersen ripped into the school’s football potential, saying that WVU is unable to attract recruits necessary to win the Big 12. In the spring game, none of the team’s quarterback options for replacing Will Grier looked competent let alone ready to compete in the Big 12. Add the transfers and less-than-stellar quarterback play with five players from last year’s squad going the NFL draft, the short-term (2019) outlook is fairly bleak.

As much as the excitement of adding a new coach is part of the processes, so is this. Rarely do coaching changes in the midst of the best of times. And even when they do (think Rich Rodriguez leaving a stacked roster in 2008), the turnover itself causes record-harming chaos.

For the past four decades, WVU has been a solid program. The biggest reason for that success is coaching stability. The Mountaineers have had four coaches over the past 39 years. That makes them the third-most stable program in the Power 5 (Penn State and Florida State have each had three head coaches during that time). Compare that to the Mountaineers Backyard Brawl rival to the north. Pitt is on its 10th head coach in the same span (15 including interim coaches). That’s a big reason why WVU has turned the tables of history over the past four decades. Since 1980, WVU has a winning percentage of .637. Pitt’s is .534.

New-coach smell is catnip to fans. But long-term success comes from stability and diligence, not shiny new things. In what is in all likelihood going to be a slog of a 2019 season, Brown is going to need some of that patience from Mountaineer fans as he builds his WVU resume.