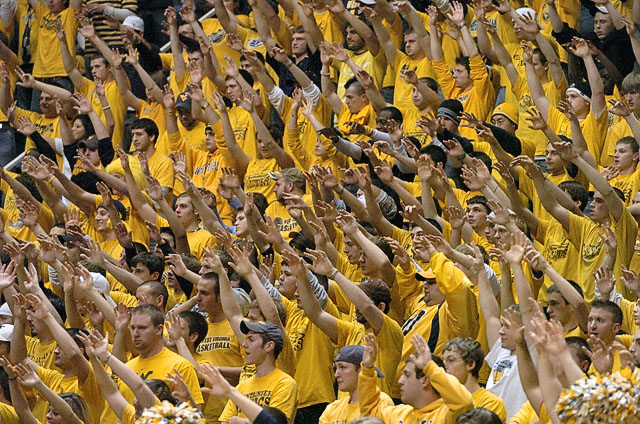 There’s never been any doubt that Mountaineer fans are a passionate bunch. If you don’t believe me, then take a look at some of the comments on our Facebook page.

While many people are down on the fact that the team is headed to CBI, this presents an opportunity. This is an opportunity for Mountaineer fans to prove they are the best out there. Also, it gives this very young team something to build on going into next season.

The WVU Athletic Department sent a message when they announced that the tickets will be $10 general admission and stated that only the lower level will be open unless it gets entirely filled. At that point the upper level seats would be made available. The message they sent was they don’t think many people are going to care about this game.

Tickets are on sale for Wednesday's game vs. Grand Canyon. General admission seating for $10 and free parking in the Coliseum lots. Order tickets at https://t.co/Js8CzCO3He pic.twitter.com/3TegSUNHIi

This was not the goal when tickets were priced this way, but WVU fans should take this as a challenge. The university is basically challenging them to fill up the first level. It’s like they’re saying, “We are going to charge just $10 per ticket and you still won’t fill up the lower level of the Coliseum.”

Fans of West Virginia University will always respond. I am in the business of managing social media and the Mountaineer page I run gets more engagement than any other page I oversee. It doesn’t matter if the article is about a heartwarming story about a backup lineman or an oft-injured guard boding farewell to Morgantown, Mountaineer fans click like the article, click the article and share the article.

One of the more recent examples of the passion of West Virginia fans happened in Cleveland. Jevon Carter was in town as a member of the Memphis Grizzlies. In response, Mountaineer fans showed up in bunches to support the WVU legend. Despite Carter not getting in the game, the fans basically filled up an entire section and waited for Jevon to come back out and say hello and sign some autographs. Of course JC came through for them.

Normally a CBI berth would be something that might not even be worth accepting. But this year’s team is different. With three starters removed from the roster before the end of the season, along with missing another starter (Konate) for much of the season, this team was spiraling downward. It looked like the Mountaineers were in line for a couple seasons of irrelevance. This team has grown together immensely over the last few weeks and additional game they get to play together is extremely valuable.

Just a few weeks ago, things were looking grim, but Bob Huggins worked his magic. By flipping over the roster mid-season, he put the pressure on the WVU freshmen and first year players to respond. Instead of a dead end lineup, West Virginia now has three impressive freshmen (Culver, McCabe, Matthews Jr.) in the starting lineup, along with two more players who are scheduled to be back in Morgantown next season (West, Haley).

West Virginia took down two NCAA Tournament-bound teams in the first two rounds of the Big 12 Tournament, including No. 7 Texas Tech, visions of the Big Dance were in Mountaineer fans’ heads. They took it to Kansas for the first portion of the game, but eventually bowed out by a final score of 88-74. The dream was over, but for this team it was still a very successful Big 12 Tournament run.

This team has been through a lot this year and fought till the finish. The least the Mountaineer fans can do is return the favor and go out and support them the whole way through their CBI run.