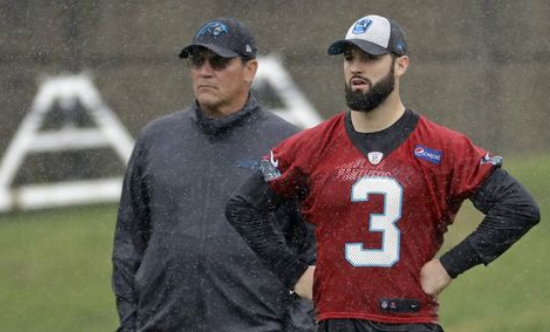 The NFL rookie minicamps are underway and several Mountaineers are getting their NFL career underway. Carolina coach Ron Rivera has taken notice of their third round pick, WVU quarterback Will Grier.

???"Will (Grier) seemed to be picking things up really quickly. That was really good." – Ron Rivera, Head Coach (@panthers)#HailWV pic.twitter.com/xsSIY9Ay2L

There has been much speculation on whether or not the Panthers are ready to turn the page on the Cam Newton era. The drafting of Grier only fueled the speculation.

Newton is coming off of a major injury and has two years and $44.3 million left on his contract. If he isn’t right physically or if Will Grier blows them away in practice, the Panthers could cut or trade Newton and only eat $2 million.

Here’s a first look at Will Grier as a Panther! pic.twitter.com/hQALWzfCC9

This article by 12up breaks down how it actually makes sense for the Panthers to cut Newton and fire up the Will Grier era and how they can do it for next to nothing.

Though it’s very likely that Will Grier sits behind Cam Newton for at least a season, the Panthers wouldn’t have drafted Grier at the top of the third round if there wasn’t at least some expectation that he will eventually become the guy.

While Grier was the fifth quarterback taken, Pro Football Focus shared an interesting statistic on the WVU product. He had the draft’s third-highest passer rating when passing from a clean pocket during the 2018 season.

Will Grier had the draft's third-highest passer rating from a clean pocket in 2018 pic.twitter.com/G6GuAQIIgu

Shoulder injuries can be very tricky, as we saw with Andrew Luck. Perhaps the Panthers just saw Grier as an insurance policy, but he could turn out being much more than that in the very near future.