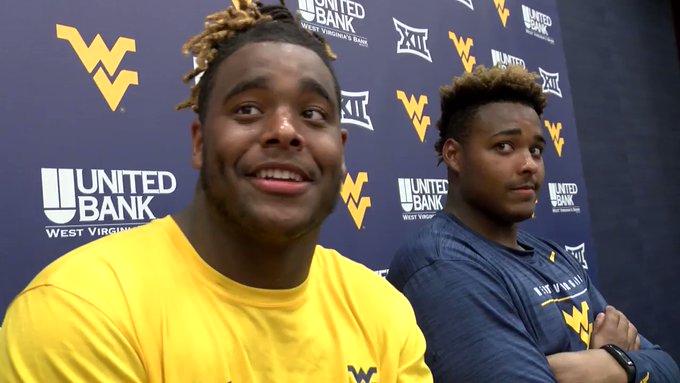 Back to their days at Fairmont Senior and even before that, it’s been special to see the brotherly love between the two Stills brothers. It has now followed them all the way up to their college days at WVU as the two are still giving opposing offenses nightmares, much like they have since they were kids.

A big play in the game was when the Stills brothers combined for a stunt move that resulted in a sack for Dante. This sack, for all intents and purposes, put the game away for the Mountaineers. Check it out:

After the win over North Carolina State, the two were interviewed together. It was special to see the two talk about the difference-making sack that was a result of a combined effort of the two.

When Dante was asked how he became open on his second sack, he had to take a moment to laugh before pointing at his big brother.

“I was just happy for Dante,” Darius said.

Brotherly Love Between the Stills Brothers

Turns out @DariusStills56 had a little something to do with @DanteStills' 2nd HUGE sack…
Is there a better pair of brothers than these two!? pic.twitter.com/vtuwISKQe4

Don’t sell Darius short. He does more than just the dirty work for Dante. He also had two tackles for loss in the Mountaineers winning effort.

Dante and Darius Stills are both in the top 4 in the Big 12 in TFL's and sacks.

More Stories about the Stills Brothers:

It’s going to be awesome to watch the Still brothers grow together and disrupt offenses in the Big 12.