BREAKING: Will Grier Drafted by the CAROLINA PANTHERS in the 3rd Round, 100th Overall! 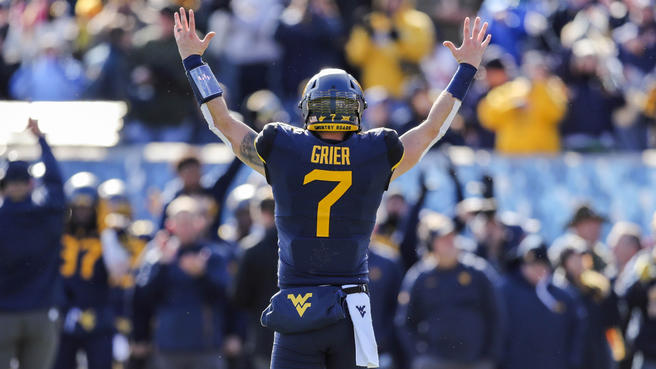 Will Grier, the former West Virginia quarterback, is headed back home to play for the Carolina Panthers.  Grier, who passed for 3,864 yards and 37 touchdown passes as a Senior this past season, will back up Cam Newton.  Grier, a Charlotte, North Carolina native announced his transfer to West Virginia in 2016, following his one-year suspension for a banned substance at the University of Florida.  Grier led the Mountaineers to an 8-3 regular season record last year, but decided to not play in the Camping World Bowl Game in order to prepare for the 2019 NFL Draft.

He was projected anywhere from a first round pick to a fourth round selection due to what many scouts considered a lack of arm strength, despite throwing with the highest speed and velocity of any quarterback in the past two years at the NFL Combine.  According to one team’s anonymous scout:  “Grier has good backup talent. I’m not sold on his arm. Lot of throws die on him when he can’t set his feet, and the great NFL QBs have to play with a muddled pocket 75 percent of the time. Requires a level of twitch, core power, arm strength to get throws off with velocity from unstable platforms. Grier doesn’t have that type of arm.”

However, there is a wide variety of opinions about Grier’s potential in the NFL.  According to NFL’s Media Analyst Daniel Jeremiah, “The one word I would use to describe Grier: smooth. He’s an effortless thrower who’s very poised in the pocket. He has outstanding foot quickness in his setup and he’s elusive versus the pass rush. He has shown the ability to subtly side step edge pressure or spin around and escape the pocket. He is also effective creating plays as a runner on both zone reads and scrambles.  Grier lacks elite size, but he has plenty of arm strength.”

Grier’s most memorable moment at West Virginia was his perfect game-winning touchdown pass to Gary Jennings and then 2 point conversion to beat the Texas Longhorns in Austin.