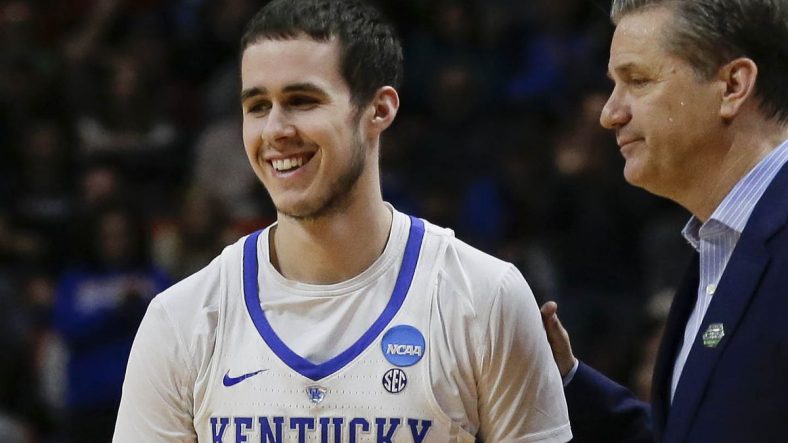 Brad Calipari, the 6’0 walk on who is the son of Kentucky basketball coach John Calipari, has decided to enter the Transfer Portal and perhaps transfer from Kentucky.  Brad Calipari redshirted last year and is seeking a situation at a new school where he will get more playing time.

During his career at Kentucky, Calipari only scored 11 points in 27 games, averaging 0.4 points and 0.2 rebounds per game.  Calipari was an above average high school player, averaging 15.3 points per game as a Senior.  However, he was not considered a Division I prospect and  decided to walk on where his dad coaches.

During his time at Kentucky, he completed his degree in Communications and will have two years of eligibility remaining at the school he chooses.  John Calipari spoke with his son about the possibility of transferring, so this does not come as a surprise to him at all.  In fact, he supports his son’s decision:

It’s hard to get minutes at Kentucky — EVEN IF YOU’RE MY SON. Brad is going to take his time with his decision and weigh all options. No matter what he does, he has my full support.

John Calipari is close friends with West Virginia Head Coach Bob Huggins.  Following Bob Huggins’ heart attack at the Pittsburgh Airport where Calipari’s cousin was a paramedic that helped save Huggins’ life, Calipari was one of the first people to visit him at the hospital.

Coach Huggins is still searching for more perimeter scoring and Brad Calipari can shoot; although no indication of where he might transfer has been revealed, perhaps walking on at WVU is a real possibility for him.