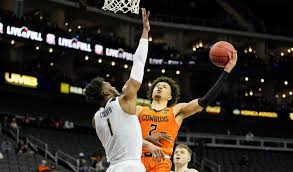 I didn’t get a chance to watch the game today with Oklahoma State because I was traveling, so I’m going to conduct a little box score analysis of the game and watch it later to see how right or wrong I was.  So do me a favor, let me know in the comments section below your opinion of the game and if managed to get anything right.

The first stat I look at is shooting percentage so I can see how many more or fewer shots we had than Oklahoma State.  We took five more shots but only made one more basket.  We also had 5 fewer turnovers, but 15 on our part is still too many.  Especially when it seems our turnovers seem to come at the most costly of times.

What stood out to me is that we also had 5 fewer offensive rebounds.  What was once a strength seems to have turned to a liability now that we’re playing 4 out and 1 in.

Speaking of the 1 in, that would be Derek Culver who is also known as a double-double monster.  He was 1 rebound short of earning yet another one.  Derek is a great player, but he needs help.  Another glaring stat that stood out to me is that Gabe Osabuohien played only 8 minutes and gathered only 1 rebound before fouling out.  Derek is being beaten up and double and triple-teamed whenever he catches the ball.  Gabe is a great defensive player, but he needs to stay on the court longer so Derek can be ready to come back in and deliver. 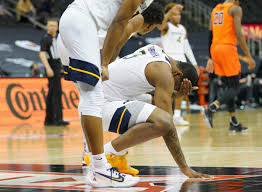 Of course, while Gabe is in the game, the shooters need to make more shots to make up for the lack of an offensive presence under the basket.  This brings me to what I see as the biggest weakness for this team.  That weakness is defensive rebounding.  Somehow, we need to cut back on possessions by our opponent.  Oklahoma State grabbed 15 offensive rebounds!

Now that Oklahoma State has bounced us out of the Big 12 Tournament, it’s time Bob Huggins figures out how we can improve defensive rebounding.  I don’t have the stat, but something tells me that Oklahoma State beat us on those second-chance points.

If WVU wants to make any noise in the NCAA Tournament, we’re going to have to somehow keep Gabe from fouling too much, yet keep playing with his defensive prowess, and get others to do whatever it takes to keep the other team from grabbing too many offensive rebounds. It also wouldn’t hurt if we could somehow up our 3 point shooting percentage.

As Bob Huggins would say, it’s really simple, all we have to do is score more points than our opponent.  If we cut back on giving up unreasonable offensive rebounds and up our 3 point shooting percentage, we can make that noise just like Texas Tech did when we bounced them out of the Big 12 Tournament in the quarterfinals a few years ago.  They went on the play for the national championship that year.  Let’s do the same.