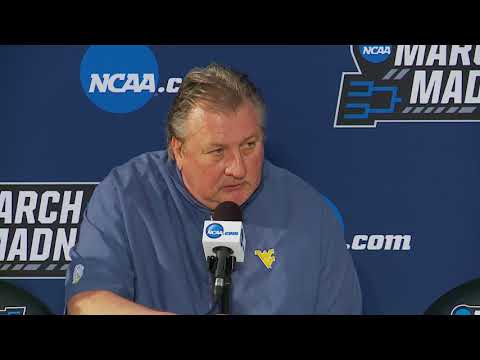 For the second consecutive season and fourth time in five seasons, the Mountaineers are headed to the Sweet Sixteen.

Bob Huggins reacts to the win, along with Jevon Carter, Daxter Miles Jr. and Lamont West.

Some points of interest include when he was asked about meeting up with old Big East rivals Villanova and coach Jay Wright.

“It’s a different team. (Villanova coach) Jay (Wright) does a great job. I’ve got great respect for Jay and what he does. We had great battles in the Big East. We spend so much time looking at film of who we’re going to play that we really don’t watch a lot of basketball from other leagues and things. I’ve seen bits and pieces and you know, the highlights on ESPN. But I don’t know very much about them.”

Also, Huggins was not surprised by the effort of Jevon Carter. This is what Huggs has came from expect from the National Defensive Player of the Year.

West Virginia shined the glass against the Herd and Huggins said he thought that was an advantage coming in. He noted that despite only shooting 39 percent in the first half, the Mountaineers were able to have a big lead thanks to the rebounding advantage.

Tip off time for the Sweet Sixteen matchup with Villanova is set for 7:27 p.m. ET Friday night in Boston at TD Garden. Very nice of them to make the Friday night game an earlier tip off than the Sunday night game. Thanks a lot, San Diego!

That’s alright. I figure Mountaineer fans are a little more okay being tired knowing that their team is headed to the Sweet Sixteen to take on Jay Wright and the Villanova Wildcats.