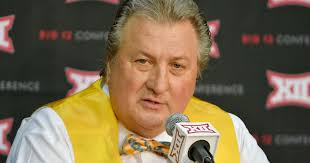 Bob Huggins always makes a splash at Big 12 Media Day with his outfits and today was no different.

Back in 2017, Huggins showed up to the media day with Senior guards Jevon Carter and Daxter Miles, and the Mountaineers were named “best dressed” with this memorable matching outfit:

Lots of talk among the schools that the Mountaineers are the "best-dressed" at #Big12MBB Media Day. #unanimous pic.twitter.com/1NclahjCYf

Huggins’ outfit for the day was a bit more tame today than it was back in 2017, but he still caught the attention of Holly Rowe, a reporter for ESPN.

Huggins’ vest, which had various logos on the back, paid homage to the state of West Virginia, West Virginia University and the football team.

Holly Rowe said, “I like the vest.  It’s business in the front and party in the back, right?”

My Big Bet on West Virginia Basketball
Austin Kendall is the Starting Quarterback – The Question is “Why?”