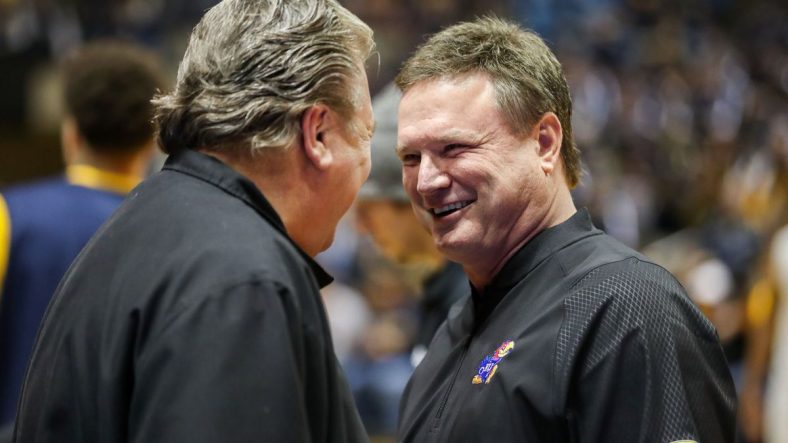 Counting tonight’s game, Bob Huggins and Bill Self have seen their teams lock horns in the Big 12 tournament three out of the last four years. In their most recent Big 12 Tournament  matchup No. 18 West Virginia lost to No. 9 Kansas in the championship game by a final score of 81 to 70.

How did the two teams get there? Well, the Mountaineers, who finished last place in the Big 12, took down the No. 7 seed Oklahoma Sooners and followed that up by upsetting the No. 2 seed Texas Tech Red Raiders. Kansas received the first round bye and took down the No. 6 seed Texas Longhorns.

Keep Kansas Out of Transition

As usually is the case, this Kansas teams likes to get out and run. The three guard lineup of Ochai Agbaji, Devon Dotson and Quentin Grimes hopes to get out in transition and get the ball into the hands of of Dedric Lawson, who leads the conference in scoring and rebounding. If this turns into and up and down the court shootout, that does not bode well for WVU.

West Virginia is ranked 338th in the country in allowing fast-break opportunities. That is something Kansas is well aware of and will be looking to attack.

Clean Up the Glass

During West Virginia’s two game surge in the Big 12 Tournament they have dominated the glass. West Virginia outrebounded Texas Tech 44 to 30 and Oklahoma 46 to 36. Derek Culver needs to crash the boards and get help from Matthews, McCabe and West. Speaking of Culver…

Keep the Turnovers Down

In West Virginia’s loss in Lawrence they committed 24 turnovers. In the win in Morgantown West Virginia had only 13 turnovers. Jordan McCabe needs to do a good job taking care of the ball with help from Haley and Matthews Jr. along with Brandon Knapper spelling him off the bench.

Get to the Free Throw Line…And Make Them

A big part of the upset over Texas Tech was going 20 of 22 at the free throw line, 90 percent. It’s tough to ask for a repeat of that, but West Virginia needs to attack the rim and get to the line to and cash in get a win over the favored Jayhawks.

Someone Need to Get Hot From Deep

West Virginia was 7-of-19 from three point range against Texas Tech. Jordan McCabe was 2-of-7. A bounce back from McCabe with him hitting four or five three-pointers would be a huge boon for the Eers.