Bob Huggins has won 860 games.  It’s hard to put that into perspective, but that’s roughly 24 wins a season on average over 36 seasons.

Bob Huggins has won 860 games.  It’s hard to put that into perspective, but that’s roughly 24 wins a season on average over 36 seasons.  His teams have participated in postseason play in 32 out of his 36 seasons.  While at West Virginia University, he’s led his team to the Final Four, the Big East Championship and 10 postseason appearances, including five Sweet 16s in nine NCAA Tournaments.

He will likely pass Jim Calhoun, Adolph Rupp and (with a good season) Dean Smith and (with a really good season) Bob Knight in all-time wins next year.  He’s getting into very rarefied air at this point in his career and he’s up there with the very best to have ever done it.  Only Mike Krzyzewski, Jim Boeheim and Roy Williams have more wins as an active coach and they are among the top five coaches ever.

Bob Huggins is one of the best coaches ever.  He’s a true Mountaineer and I wouldn’t want anyone else on the WVU sideline other than him, but I can’t be the only fan that constantly worries that he could drop over dead anytime.  Stomping up and down the sidelines, drenched in sweat, red-faced, I worry and I think most Mountaineer fans feel the same way.  It’s time we stop ignoring it and acting like it’s not a problem.

I want Bob Huggins to be our coach forever.  I want him to yell and scream at referees and our underachieving players for 100 years more.  There’s no one that will ever be like Bob Huggins again and that’s why it’s so critically important that he does something to improve his health now.  Bob Huggins is 65 years old and he is morbidly obese.  Now is the time to get this in check before it’s too late. 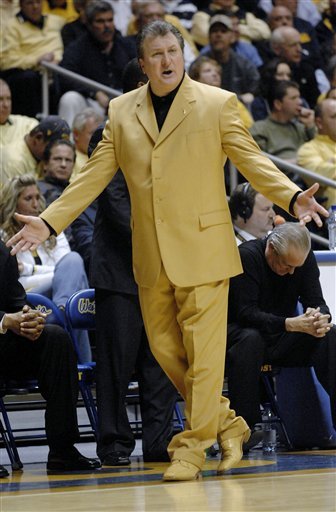 Nothing would make me more proud than to see Huggins drop 50-75 pounds and break out his gold suit one more time.

Huggins’ health and longevity as the coach has likely started to affect recruiting as well.  When Kenyon Martin, Jr., decided to play at Vanderbilt, it’s difficult not to consider if it had anything to do with whether Huggins would be around as the coach 2, 3 or 4 years from now or not.  Recruiting doesn’t matter in the big picture, though, and ultimately neither does winning basketball games, but I do want Bob Huggins to live forever and I don’t want him to die before he brings home a National Championship back home to West Virginia.  I believe that is what’s most important to him and to the 1.8 million people that love and adore him.