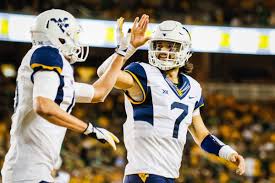 Many would argue that West Virginia was a Will Grier injury away from winning ten games. The hype train is rolling for 2018. Bleacher Report names WVU a team that could crash the College Football Playoff.

Will Grier and the Mountaineers welcomed Texas to town as favorites while sitting at 7-3 on the season. After Will Grier injured his finger late in the first quarter it changed the entire path of the Mountaineer season.

The Mountaineers roll into 2018 with a healthy Grier to go along with a receiving core led by David Sills, Gary Jennings, Marcus Simms to go along with Alabama transfer TJ Simmons. Starting running back Kennedy McKoy is back as well.

2017 recap: Led by Florida transfer Will Grier, the Mountaineers compiled a 7-3 record while only losing to ranked teams. That should be the focus, since Grier’s finger injury took a top-10 quarterback off the field. West Virginia lost its final three contests without him.

2018 outlook: Grier and All-American wideout David Sills V are back, as well as 1,000-yard receiver Gary Jennings. Between them, Kennedy McKoy and Marcus Simms, the ‘Eers boast one of the nation’s most formidable scoring attacks. Al-Rasheed Benton and Kyzir White leave major voids on defense, but last season’s inexperienced D-line is a year older and will bolster the unit.

The CFP path: Defeating both Tennessee and NC State is essential because November is a minefield. The Mountaineers end 2018 opposite Texas, TCU, Oklahoma State and Oklahoma—all of which defeated WVU last year. (Yes, Grier was unavailable against UT and OU, though the latter would’ve been favored.) That’s a treacherous finish, but the Mountaineers have the firepower to compete with anyone.

While the Mountaineers are far from a favorite to make it to the College Football Playoff, it’s encouraging to see publications rating it as something to watch out for. It will be largely dependent on the defense improving as the offense is going to be very powerful, particularly the passing attack led by Will Grier.