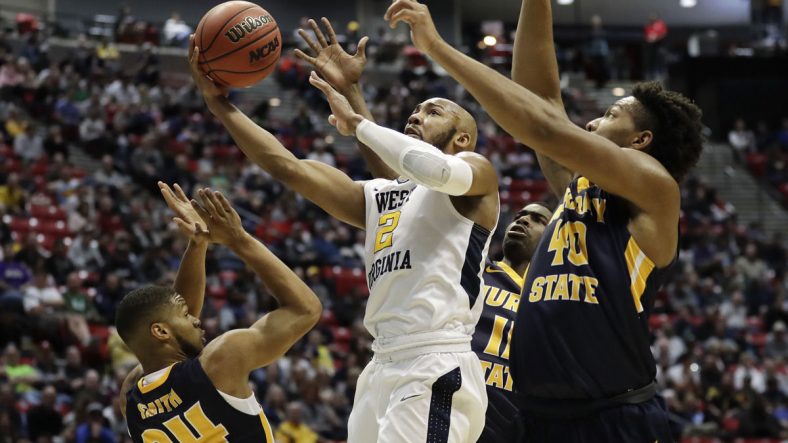 Earlier in the season the Mountaineers were a top 10 team. Now, according to the Bleacher Report Sweet 16 power rankings, West Virginia is back up there.

After a meteoric rise to the No. 2 overall ranking, West Virginia dropped nine games in the remainder of the regular season and Big 12 Tournament. After the losses West Virginia entered the NCAA Tournament as a 5 seed. The Mountaineers have taken advantage of their chance and crushed Murray State and Marshall in the first two rounds, setting up a Sweet 16 matchup with Villanova.

Along with West Virginia advancing to the second weekend of the NCAA Tournament, there have been loads of upsets. Because of this, West Virginia checks in as the No. 4 overall team in the Bleacher Report Sweet 16 power rankings.

How They’ve Looked: Relentless. Murray State’s Jonathan Stark and Marshall’s Jon Elmore were arguably the two best minor-conference players in the country this season, but Press Virginia made them look like a pair of bench-warmers. The duo had a combined line of 24 points on 24 field-goal attempts with eight assists and 10 turnovers. The Mountaineers were suffocating on offense, too, averaging 89.5 points in easy-looking victories.

Bread and Butter: Shot-preventing defense. It used to just be steals, but over the last two seasons, West Virginia has also been one of the best shot-blocking teams in the nation. The Mountaineers currently rank No. 5 in block percentage and No. 8 in steal percentage. And even when they aren’t actively piling on numbers in both categories, the opposition often looks skittish, worried about where the next Sagaba Konate emphatic rejection or Jevon Carter “pick-two” is going to come from.

Achilles’ Heel: Half-court sets. If you can keep the turnovers under control and run your offense while forcing West Virginia to do the same on the other end, this team is beyond beatable. The Mountaineers don’t shoot well, and the constant effort to force turnovers frequently results in fouls or wide-open three-point attempts. If they get at least 14 combined steals and blocks, it’s game over. If that total is 11 or fewer, they lose more than 60 percent of the time (5-8).

MVP: Carter. The senior point guard has been quietly putting up phenomenal numbers all season long, but he’s really balling out in postseason play. In five games dating back to the start of the Big 12 tournament, Carter has averaged 20.2 points, 7.4 assists, 4.0 rebounds and 3.6 steals while shooting 48.3 percent from three-point range. Good luck finding anyone else coming anywhere close to those numbers.

Championship Blueprint: Wreak havoc on defense and keep getting contributions from multiple sources on offense. Too often this season, it was Carter or bust on offense. Case in point: Daxter Miles Jr. is the team’s second-leading scorer for the year, but he hasn’t scored in double figures in either tournament game. Yet there are a lot of Mountaineers who are capable of putting up points. Konate, Esa Ahmad, Teddy Allen, Lamont West and James “Beetle” Bolden each scored at least 11 in one of the two games. When four or more guys score in double figures, Press Virginia is almost unbeatable.

Though West Virginia is ranked No. 4 by Bleacher Report, the upcoming opponent is No. 2 Villanova.

There have been many great WVU-Villanova battles over the years – like this 2006 upset when Kevin Pittsnogle, Mike Gansey and Johannes Herber combined to score 66 points in a 91-87 win on the road over the No. 3 Wildcats. pic.twitter.com/t5MVmzuKmt

West Virginia and Villanova are set for a showdown on Friday at 7:27 p.m. ET.