Is Bill Self Going Down? 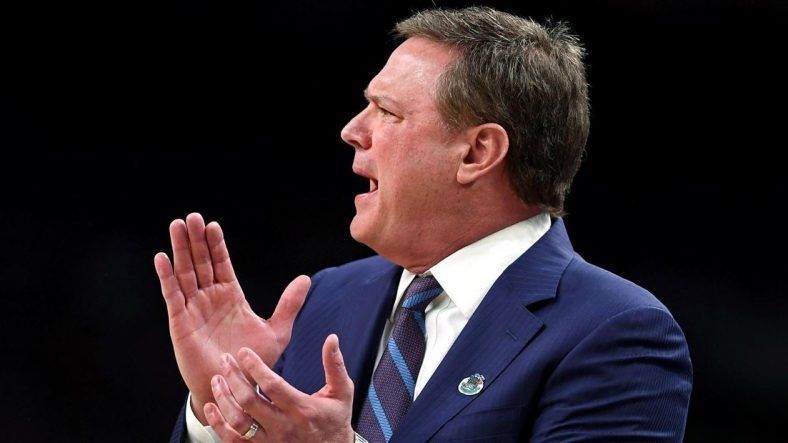 A series of texts between Kansas coach Bill Self and an ex-Adidas rep has Bill Self in some serious hot water. These texts show how high-level college basketball recruiting actually works.

According to a report from The Kansas City Star, Self told former Adidas rep T.J. Gassnola he was happy with Adidas but added “just need to get a couple real guys.”

Gassnola repllied by text, “In my mind, it’s KU, Bill Self. Everyone else fall into line. Too (expletive) bad. That’s what’s right for Adidas basketball. And I know I’m right. The more you have lottery picks and you happy. That’s how it should work in my mind.”

“That’s how ur (sic) works. At UNC and Duke,” Self replied back.

“I promise you I got this,” Gassnola replied. “I have never let you down. Except (Deandre). Lol. We will get it right.”

Gassnola also testified that former Adidas exec Jim Gatto told him that he received a thank you call from Bill Self after Silvio de Sousa officially committed to Kansas.

TJ Gassnola just testified in court that former Adidas exec Jim Gatto told him he got a call from Bill Self thanking him after Silvio de Sousa committed to Kansas.

To sum things up, Gassnola is pretty much guaranteeing Self that he will land five-star prospects since Kansas is the biggest basketball program with Adidas. He also assures Self that he has never let him down, except for with Deandre Ayton who is the centerpiece of a big-time scandal with Sean Miller and the Arizona basketball program. Kansas could not land Ayton, despite Gassnola paying Ayton’s friend $15,000.

Self was right about one thing. This stuff has been going on in college basketball for a long time.

Bill Self wants Gassnola working for Kansas. Why? Because he believes with Nike working for Duke, North Carolina and Kentucky, that’s the only way he can contend with those teams.

Arguably the four biggest blue-blood programs in college basketball appear to be paying large sums of players to come to their university. Why? Because that’s how it works.