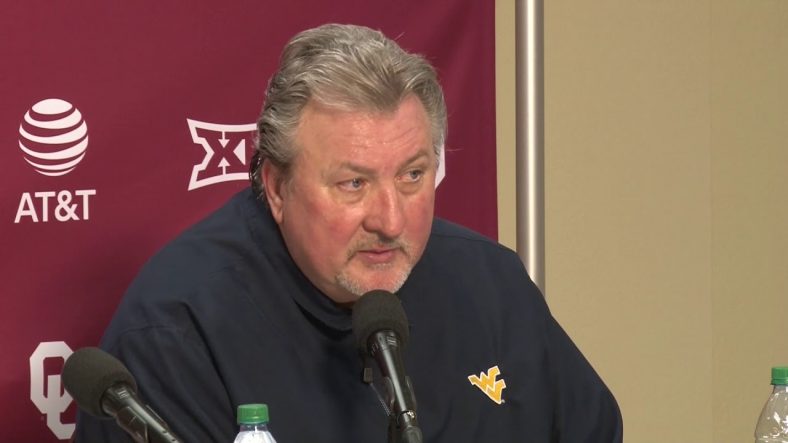 Bob Huggins was feeling good after his team’s big win at Oklahoma on Big Monday. Good enough to crack some jokes about the Mountaineer bandwagon.

The loss was the first home loss for the Sooners this season. It was also Oklahoma’s second straight loss. The win gives the Mountaineers a very modest two-game winning streak, but the way things have been going it’s a big step in the right direction. Also, getting to get a win in the presence of the ESPN-led Trae Young hype machine was satisfying for all.

? ICYMI: Highlights from tonight's 75-73 victory at No. 17 Oklahoma. #HailWV pic.twitter.com/0ywFHaUIEL

Huggs loves his state and the fans of his team, so he is worried about their well-being. He is afraid that some of the Mountaineer fans may hurt themselves jumping back on the bandwagon.

Bob Huggins: "There are some really non-athletic, overweight people that jump on and off (the #WVU) bandwagon so much I'm afraid they're going to get hurt."

Just a few weeks ago the Mountaineers skyrocketed to No. 2 in the AP Top 25. It was the highest ranking in WVU history. From there the Mountaineers went on a streak of tough losses including blowing a 17-point lead over Kentucky at home and a 16-point loss against basement dwelling Iowa State.

Huggins knows how this works. Now that the Mountaineers have a couple wins in a row praise will start coming back in the Mountaineers’ direction. Bob Huggins couldn’t help making a joke about the situation.

“I think we’re back,” Huggins said after the game. “We’re back to being the competitive, refuse to lose guys we were. We lose a couple of games we would have, could have won, but we just don’t make any shots.  But we started making some shots again.”

At another point Huggins said, “For some reason nobody ever fouls us. I’m not sure why that is.” Huggins was referring to the different in free throw attempts. The Mountaineers had nine free throw attempts compared to 19 for the Sooners.

Saturday at noon the Mountaineers take on the Oklahoma State Cowboys in another Big 12 game. This is a great opportunity for West Virginia to get on a roll and contend for the regular season Big 12 title.

The Mountaineers are back at the Coliseum this Saturday for True Blue! Tipoff against Oklahoma State is set for noon ET. All fans are encouraged to wear blue. #HailWV pic.twitter.com/K5xRkkLLbT