Big-Time Elite Basketball Talent in the State of West Virginia 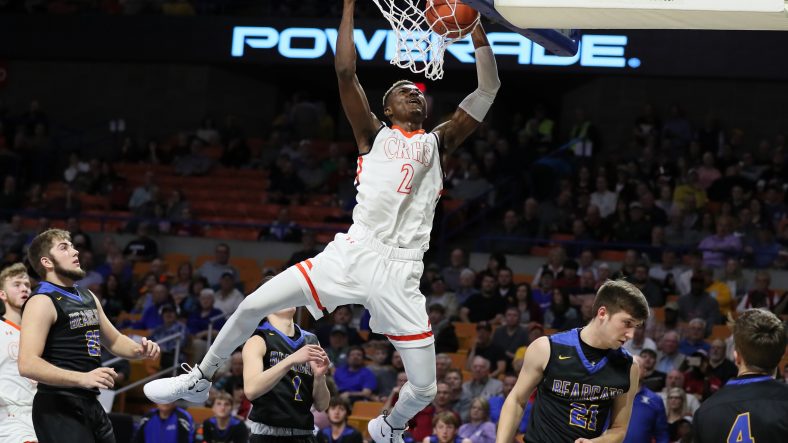 The following are the top four high school players in West Virginia in the 2020 class.  The top three, Jaemyn Brakefield, Zach Loveday and AJ Hoggard, all from Huntington Prep, have been offered scholarships by the top programs in the country, but Obinna Anochili-Killen of class AA state championship team Chapmanville High School, is just starting to get the attention of universities around the country.  Only Brakefield has been offered by West Virginia University so far.

Jaemyn Brakefield, the 6’8 205 pound power forward from Huntington Prep, is the only aforementioned player with an offer from West Virginia University.  Brakefield is a big, strong, athletic player ready to step in and contribute Day 1 in college.  The 4 star recruit is the 29th ranked prospect in the country according to Rivals.  Brakefield has 26 offers from the most elite programs in the country, including Kentucky, Florida, Kansas, UCLA, Georgetown, and the list goes on and on.  The 2020 prospect’s only visit has been to Mississippi last year and he’s currently at 100% lock according to FutureCast.  Brakefield averaged 19.3 points and 6.9 rebounds per game for Huntington Prep last year.

Zach Loveday, also from Huntington Prep, is a 7’0 center and the 54th ranked prospect in the country according to Rivals.  The 4 star Loveday has 11 offers from Baylor, Florida, Indiana, Michigan, N.C. State, Ohio State, Stanford, Xavier, Iowa,  Lousiville and Purdue, who appear to be the current leaders for his services.  Loveday is surprisingly smooth for his height and is a high motor player whose perimeter game is starting to develop.

AJ Hoggard, a 6’4 point guard from Huntington Prep, is a four star prospect and the 95th overall ranked recruit in the 2020 class.  Hoggard averaged 17.4 points, 3.4 rebounds and 5.1 assists per game last year at Huntington Prep.  Hoggard is a big, strong point guard that can score and pass.  He’s exceptional at getting to the rim and finishing.  Hoggard holds offers from 12 schools, including Louisville, Marquette, Maryland, Michigan State, Mississippi, New Mexico, Oregon, Providence, Rutgers, Temple, Virginia Tech and Wake Forest.  Louisville currently appears to be the front-runner for Hoggard.

Obinna Anochili-Killen, a 6-9, 190-pound Small Forward from Chapmanville, WV, has led his Chapmanville Regional High School to back to back Class AA state championships.  In this year’s championship win over Fairmont Senior, Anochili-Killen nearly had a triple-double, finishing with 12 points, 12 rebounds and 8 blocks.  Currently a 3 star prospect and rising, Anochili-Killen has surprisingly flown under the radar.  He has offers from Akron, East Tennessee State, Marshall, Rhode Island, Evansville, South Florida and Penn State.  In the highlights below, he makes the game look very easy with incredible smoothness and versatility: