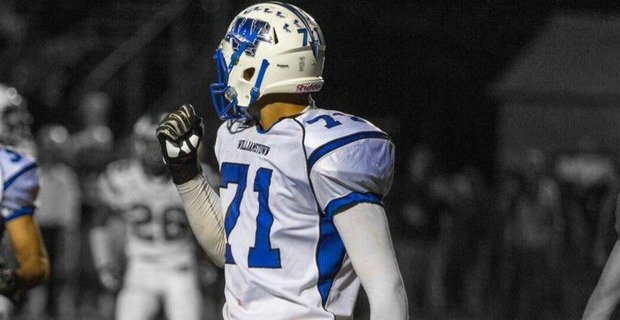 Aaron Lewis, the 6’5 240 pound Defensive Lineman out of Williamstown, New Jersey, will officially make his commitment to West Virginia University today.  Lewis holds offers from Michigan, Ohio State, Penn State, Wisconsin and West Virginia.  Lewis, a 3 star recruit, made up his mind that Morgantown would be his future home after visiting campus and attending the Gold Blue Spring Game this past weekend and is expected to make it official today.

Be on the lookout tomorrow 👀

In addition, the communication on Twitter between West Virginia coaches confirmed that Lewis has already made the commitment.  Travis Trickett sent out the following message referencing both Coach Lesley and Coach Scott, the leader recruiters for Lewis:

Lewis has big-time potential.  According to 247 Sports, he has an “ideal frame for defensive end. Good length and can carry 260 pounds with ease. Can play inside or on edge. Has fast-twitch muscles. Gets off ball quickly. Physical at point of attack. Re-directs well along line of scrimmage. Plus body control. Great motor. Has closing speed. Tackles through the ball carrier. Has a good swim move. Needs to work on staying lower within first few steps. Improved hand work is important. Uses speed to the edge too frequently. Multi-year starter at top-20 college program. Third day NFL draft pick.”  Can’t wait to see him officially in the Gold and Blue!