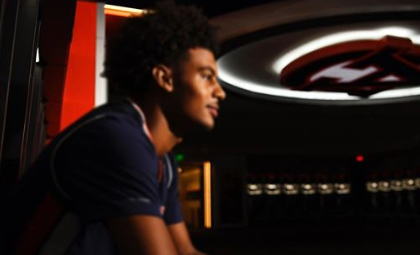 Isaiah Cottrell, the 4 star WVU basketball commit originally from Las Vegas, Nevada, recently moved to Huntington, West Virginia to finish his high school career at Huntington Prep.  Before coming to Morgantown to play for the Mountaineers in 2020, Cottrell has some business to handle in Huntington first.  To begin, he wants to win a high school national championship with Huntington Prep and then the next goal should be to bring his teammate, 5 star Jaemyn Brakefield to WVU with him.

Jaemyn Brakefield, the 6’9 220 pound top recruit in the state of West Virginia, plays alongside Cottrell at Huntington Prep and has been on the radar of Bob Huggins for some time now.   Brakefield visited Morgantown this weekend and hopefully fell in love with the facilities, culture and team.

Brakefield is a top 20-30 prospect in the entire country and as a Junior last season averaged 19.3 point per game on 51% from the field.  He’s a left-handed powerhouse under the basket and can step out and shoot from the mid-range as well.

With an impressive list of offers from every major program in the country, Brakefield can go anywhere that he wants to play college basketball.  However, West Virginia’s impressive facilities, his connection to Isaiah Cottrell, getting to play for one of the best coaches in basketball history and staying in state to play for the Mountaineers might be enough to bring him home to Morgantown.  In addition, Jordan McCabe continues to work his magic as WVU’s top recruiter: