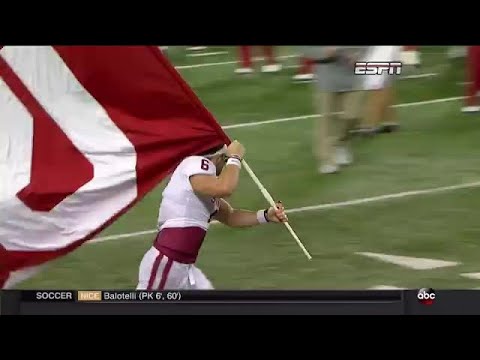 Oklahoma and TCU went on the road to secure big-time revenge wins. Iowa St lost in overtime to Iowa and the Baylor program is officially a dumpster fire. All in all, the Big 12 held its own in week 2 of the college football season.

Last year Ohio State stormed into Norman and thrashed the Sooners by a score of 45-24. With revenge on their mind, Oklahoma went into Columbus as touchdown underdogs looking for their first signature victory for new head coach Lincoln Riley. They did just that. No one was happier than former Sooners head coach Bob Stoops.

In typical Baker Mayfield fashion, the Sooners quarterback set Twitter ablaze when he rushed to the 50-yard line immediately after the game and jammed a Sooners flag into the Buckeyes home field.

Baker Mayfield’s behavior falls somewhere between passionate and wildly immature. At this point he is who he is. The rest of Oklahoma’s schedule is dying to take this guy and his team down, but that’s nothing new.

TCU also put up a signature revenge win, taking down the Razorbacks 28-7. The TCU defense shut down the Razorbacks offense holding them to 267 total yards of offense and forced two turnovers. TCU never trailed in this game, grinding out a road win against a tough SEC team.

Baylor continues to free fall as they took a tough loss at home. We can officially put the Baylor Bears football program in dumpster fire mode as they take an embarrassing home loss to the University of Texas San Antonio Roadrunners.

In a very entertaining game Iowa State lost a tough one to Iowa at home, 44-41 in OT. Texas, Kansas State, and West Virginia took care of business in contests they were heavily favored. Kansas was dominated at home by Central Michigan, as expected.

All in all, it was a successful week for the Big 12 as Oklahoma’s win in Columbus will not be forgotten when it comes to playoff time.