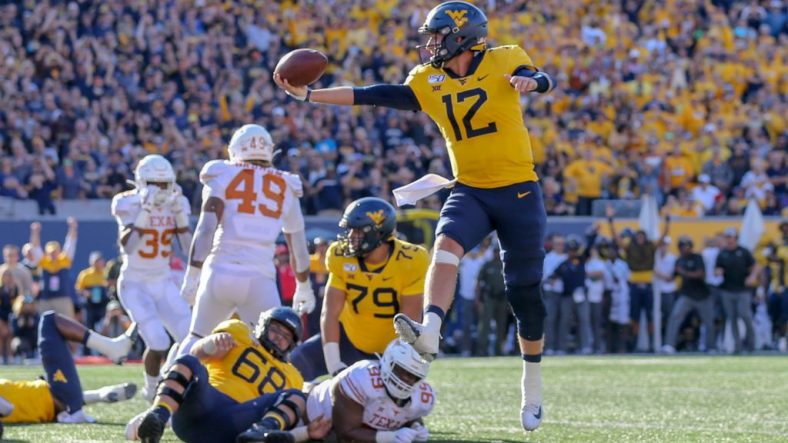 Austin Kendall is one of the big topics of Mountaineer fan discussions. Many were ready to see him ripped out of the game in the opener, while others point out he’s in a new system and he needs to be given time to grow.

This gives a great opportunity for debate. Both sides have made great points. For instance, if there was a worthy replacement, wouldn’t Neal Brown have summoned him after some of the offensive performances by his Mountaineers this season? Also, if Kendall was pulled after two interceptions, what if Jack Allison got hot and led the Mountaineers to a win over Texas?

Well, this article by 247Sports does not support the case of #TeamKendall. They ranked Austin Kendall dead last among Big 12 quarterbacks. Check it out:

“Remember when Lincoln Riley said that Kyler Murray and Austin Kendall were neck-and-neck,” has become a bit of a running joke after Kendall’s rough start to the season. The good news is that he’s completing 65.8 percent of his throws. The bad news is that he’s thrown nine touchdowns, seven interceptions and is averaging a paltry 6.5 yards per passing attempt. That bipolar nature was on display against Texas, when Kendall set a season high for passing yards (367) and tied his season high for touchdowns (three), but also threw three interceptions, including a couple pretty awful ones. If he can limit those turnovers, he has a chance. Kendall has the lowest passer rating of all the consistent Big 12 starters, more than nine points lower than the quarterback in front of him.

When you look at the numbers it’s hard to argue his case. Seven interceptions to just nine touchdowns.

With his history, Mountaineer fans are hopeful he can turn things around and push himself closer to the top. And they’re hoping that happens soon.

At the top of the list is Jalen Hurts of Oklahoma, followed by Sam Ehlinger. It’s good to see they didn’t force Sammy to the top despite not deserving it as the media seems to have an infatuation with the guy.

Then coming in at No. 3 is the guy the Mountaineer defense will be trying to contain this weekend: Brock Purdy. Here’s what they had to say about him:

Purdy was a revelation as a true freshman a year ago, winning the starting job and leading Iowa State to eight regular season wins, the best mark of the Matt Campbell era, despite Campbell admitting that the Cyclones just threw an offense together for him midseason or so. And while the Cyclone offense has had its struggles this year as Iowa State has looked for skill position talent to replace David Montgomery and Hakeem Butler, Purdy looks better than ever, completing 70.8 percent of his throws for 1,578 yards and 10 touchdowns with two interceptions. He’s also rushed for 203 yards and five scores, and showed off his running ability by putting a highlight-reel hesitation move on a TCU defender last week.

It’s a great opportunity for Austin Kendall to skyrocket up the rankings with a big performance over the Cyclones. Another turnover-filled performance will have Mountaineer fans get out there pick axes and call for a change.