“Best Virginia” vs. “The Redeem Team” 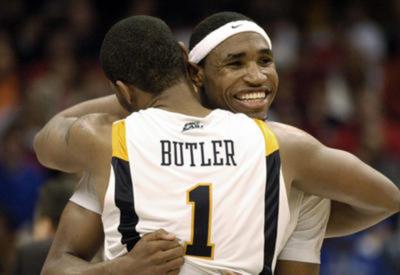 Several of the greatest West Virginia basketball players in modern history have formed a team to compete in The Basketball Tournament, a 64 team single-elimination tournament offering a winner-takes-all $2 million prize.  “Best Virginia” is comprised of WVU’s all-time best players still capable of playing.

This is a deep, talented team.  Not only are they deep and talented, this is a team filled with winners.  All members of the team are NCAA Tournament battle-tough and have represented (and often led) the Mountaineers in the Sweet Sixteen, Elite 8 or Final Four.  All of the players, with the exception of Nathan Adrian, have played professionally either overseas or in the NBA G League.

Coach Huggins informed the media that many of the Best Virginia players have been practicing and working out at WVU’s practice facility recently.  This has been a great thing for the former players and has also given current players an opportunity to watch and learn from some of the finest players in the history of the school.

Imagine if Best Virginia were to compete against this year’s WVU Basketball team, also known as The Redeem Team.  The game would be played with exact college rules, two 20 minute halves, the college three point line and actual referees.  Bob Huggins would of course coach the current team.

The 2019-2020 team, nicknamed the “Redeem Team“, is very talented and is working hard to come together as a team to redeem last year’s down season.  Led by returning players Jordan McCabe, Emmitt Matthews, Jr., Jermaine Haley and Derek Culver, the current team will add highly-touted recruits Oscar Tshiebwe and Miles McBride, as well as JUCO transfers Sean McNeil and Tajzmel “Taz” Sherman.

Although the Redeem Team is younger, it’s unlikely they would have an answer for players like Da’Sean Butler, Kevin Jones, Joe Alexander, Tarik Phillip and Jaysean Paige.  Best Virginia players are a bit older, but most of them currently play overseas and still in the prime of their basketball lives.

Point Guard – Jordan McCabe vs. Tarik Phillip/Juwan Staten/Darryl Bryant:  Regardless of which point guard started for Best Virginia, they are bigger, stronger, faster and more talented than McCabe.  In addition, all three have remained very active professionally and likely as good or better than they were at WVU.  Advantage:  Best Virginia

Shooting Guard – Jermaine Haley vs. Jaysean Paige:  Haley, at 6’7, has a 4 inch height advantage on Paige and doesn’t make a lot of mistakes.  He does well getting to the basket but struggles with his perimeter game.  Paige has been extremely aggressive offensively in Alumni games and went off for 57 points in last year’s game.  Paige is also a talented defender and wouldn’t have an issue with stopping Haley.  Advantage:  Best Virginia

Small Forward – Emmitt Matthews, Jr. vs. Joe Alexander/Nathan Adrian:  Huggins has said that Matthews has come back this season bigger, stronger and better.  Matthews is long, athletic and an ideal small forward for Huggins.  Joe Alexander is talented on a different level, however.  The former 8th pick in the 2008 NBA Draft, Alexander is perhaps the most athletically gifted players in program history.  While playing in overseas (currently in Turkey), he has become even more versatile.  Matthews is becoming a man, Alexander is a man.  Advantage:  Best Virginia

Power Forward – Oscar Tshiebwe vs. Kevin Jones/Da’Sean Butler:  Lots of talent here, but Jones and Butler are two of West Virginia basketball’s most dominant players.  In addition, they are winners.  Tshiebwe has the talent to be as good or better than them one day, but that will take some time before it happens.  Advantage:  Best Virginia

Center – Derek Culver vs. Devin Williams: Williams is big and strong, but Culver is the more talented scorer and rebounder.  Culver could hold his own against Williams and even perhaps get the best of him on the boards.  Advantage:  Even

Huggins has a lot to look forward to with his current team, but Best Virginia is simply too big, too strong and too talented. Many of the Best Virginia players have played together in college and have remained close since then.  Their versatility and size would overwhelm the current team.  No redemption here.