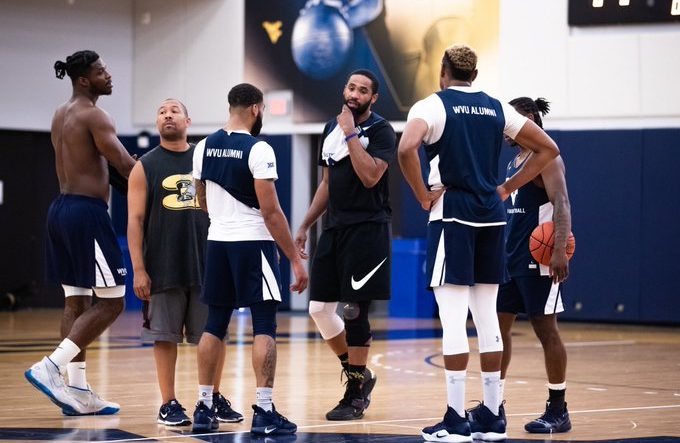 Best Virginia players turned back the clock and looked very much like their collegiate selves in the opening round of The Basketball Tournament.  Juwan Staten was just as quick, just as bouncy.  Jaysean Paige could score at will.  Kevin Jones looked longer and leaner than he did at WVU.  John Flowers is a more complete player, an outstanding defender and a big forward who can step out and shoot the 3.

In addition to the players being physically ready, Best Virginia looked like a team during their 79-63 win.  Seven City Royalty hung around for a while in the 2nd half, Best Virginia was just too much despite sloppy play and cold shooting.  Although there were some expected breakdowns on the defensive end, the overall effort was outstanding.  Several of the players on Best Virginia are long and have learned to play defense from Bob Huggins.

Best Virginia was led by Jaysean Paige with 17 points, John Flowers with 13 points and Kevin Jones with 12 points.

Take a look and listen inside the Best Virginia pregame huddle! #TBT2019 pic.twitter.com/Z1wKmZFUZ5

Best Virginia will go on to play the 4-time defending The Basketball Tournament Champions, Overseas Elite.  Led by two-time tournament MVP DJ Kennedy and former NBA guard Jeremy Pargo, Overseas Elite is the favorite to win the title for the 5th consecutive year despite losing two of their top players (Kyle Fogg and Errick McCollum).

The 2nd round game will take place tomorrow, Saturday July 27th at 5PM on ESPN3.  Best Virginia will likely be playing in front of a home crowd with most of the fans in Richmond cheering for them.  The odds of an upset win for Best Virginia look great!

Jaysean Paige (@born_Ready0) gets the steal, goes coast-to-coast, and finishes the TOUGH and-1! #TBT2019 pic.twitter.com/taIXmhfoHB