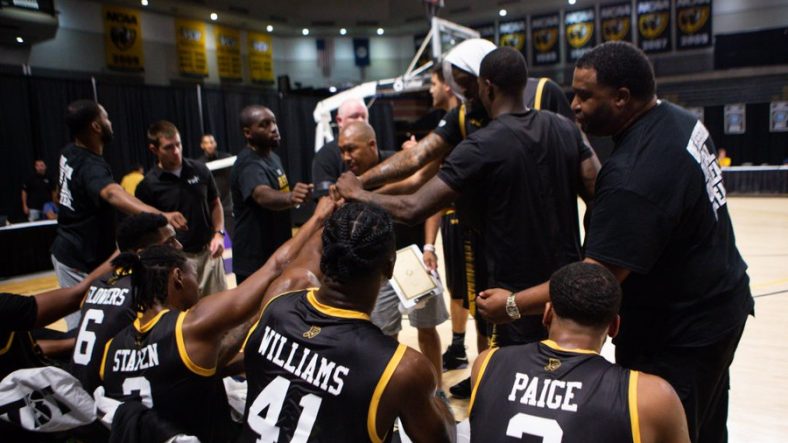 Best Virginia gave a spirited effort against the defending champions in the second round of TBT. The absence of Juwan Staten loomed large as Best Virginia was able to do a good job of causing turnovers and getting on the glass, but the team had a tough time getting buckets against the vaunted Overseas Elite defense.

The first half was back and forth. Best Virginia took the lead in the second quarter on this three-pointer by Teyvon Meyers, putting Best Virginia up 33-31.

The steal … THE ALLEY-OOP OFF THE BACKBOARD ?

The third quarter was back and forth as well. Coach Jarrod West had Overseas Elite guessing with the 1-3-1 zone. This allowed Best Virginia to tie the game early in the third quarter.

Eventually the defending champs found their rhythm and went on another to push the lead to 63-51 with 1:03 to go in the third quarter. The game headed to the fourth quarter with Overseas Elite leading 65-54.

A double-digit lead for @overseaselite as we head to the final quarter. #TBT2019 pic.twitter.com/rRK3ZFKc72

Best Virginia came out strong to start the fourth quarter, forcing Overseas Elite to burn a timeout as Press Virginia was in full effect.

Overseas Elite took control after the timeout and held onto their lead, winning by a final score of 80-68. It was a great effort by Best Virginia, but there’s a reason their opponents have won four in a row. They play great together as a team on both ends of the court.

It was a fun time for all West Virginia fans to join together in July and root on some familiar faces representing the state. All can agree that another berth in TBT for Best Virginia would be great for the players and fans alike. It looks like that’s the goal: