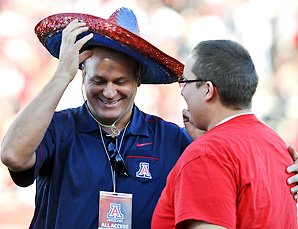 Mountaineer fans should wish him the worst curse ever: May his children attend Pitt.
Check it out:

Seth Davis recently sat down with Rodriguez, now at Arizona, to discuss many topics from the past, including his move from West Virginia and how close he was to taking the job at Alabama.

During the interview, Davis felt that Rodriguez was “hurt” by the way things ended at West Virginia, and in the end, he just didn’t trust the administration at that time.

Rodriguez says he never had a plan to leave WVU early or prepare for the Michigan job, but the President and Athletic Director at WVU during that time wasn’t on board with the direction of the program and where Rodriguez wanted to take it.