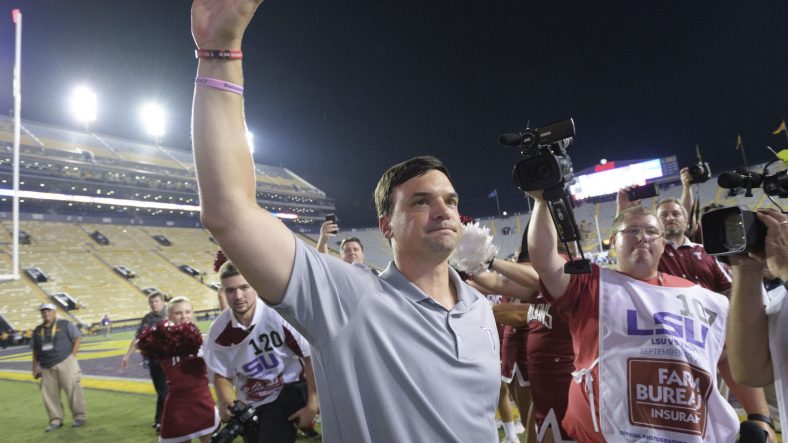 The West Virginia Mountaineers have a trip to Norman slated for this weekend as they will be massive underdogs when they take on the Oklahoma Sooners.

WVU is a massive underdog against Oklahoma. Vegas oddsmakers set the Sooners as 33.5 point favorites. Thirty-three and a half freaking points.

That’s an insane number of points. Unless you are a Kansas Jayhawk fan, it’s crazy to see your team as that big of an underdog in a conference game.

No need, to worry, though. Luckily for Mountaineer fans, Neal Brown has experience in this exact type of situation. This is a coach who has led Troy to some massive upsets. It’s only a matter of time for one to come at WVU. Why not this weekend?

Neal Brown led his Troy Trojans into Baton Rogue and spoiled LSU’s homecoming when they took them down by a core of 24-21.

The Troy University Twitter page even thanked them for their invite to Homecoming.

Hey @LSU, thanks for having us down for homecoming! We really enjoyed it! ?

Troy was a big-time underdog in this game. Not quite 33.5 points, but the Tigers were still massively favored.

Then there was the time he led the Troy Trojans into Lincoln and led them to a win over the Nebraska Cornhuskers. The Trojans got the win by a final score of 24-19.

Cedarius Rookard with a 58-yard punt return for a touchdown and Troy leads Nebraska 10-0 in second quarter.

Troy was a 12-point favorite against Nebraska.

While these Troy teams weren’t 33.5 point favorites, these teams don’t have the Power 5 talent Brown has access to at WVU. It’s taking a while to get things in place, but once they are, the upsets will come.

In West Virginia’s last two games they were able to hang for three quarters. It’s going to take four quarters of excellent football to have a chance against the Sooners on their home field.

With Neal Brown leading the way before the upsets come. Why not now?