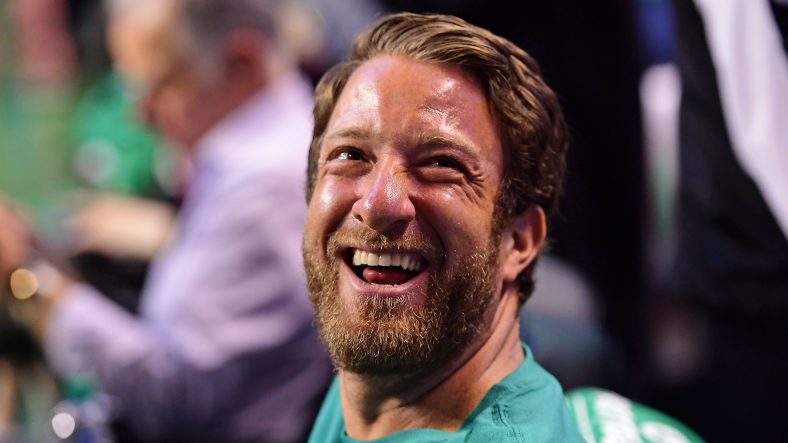 BOSTON, MA – MAY 23: Barstool Sports founder David Portnoy attends Game Five of the 2018 NBA Eastern Conference Finals between the Cleveland Cavaliers and the Boston Celtics at TD Garden on May 23, 2018 in Boston, Massachusetts. NOTE TO USER: User expressly acknowledges and agrees that, by downloading and or using this photograph, User is consenting to the terms and conditions of the Getty Images License Agreement. (Photo by Adam Glanzman/Getty Images)

Every week the Barstool College Football Road Show chooses a college football game of their choice. This week, the show will be in Morgantown for the West Virginia Mountaineers taking on the Texas Longhorns.

Dave Portnoy, Founder and President of Barstool, will be in attendance as well.  The last time Portnoy was in Morgantown he did pizza reviews from some of the top pizza restaurants in Morgantown, including Pizza Al’s.

Moments ago, Dave Portnoy answered some questions from fans on Twitter and one of the fans asked, “Why aren’t you going to Auburn versus Florida?”  Portnoy’s response was perfect: “Because we circled West Virginia as a place we needed to be at the beginning of the season.  I love Morgantown and the state in general.”

Because we circled West Virginia as a place we needed to be at the beginning of the season. I love Morgantown and the state in general. https://t.co/BnEZAZvBSB

Be sure to tune into the show today at 1:30PM live from Kegler’s located at 735 Chestnut Ridge Road in Morgantown, West Virginia!  Let’s Go Mountaineers!