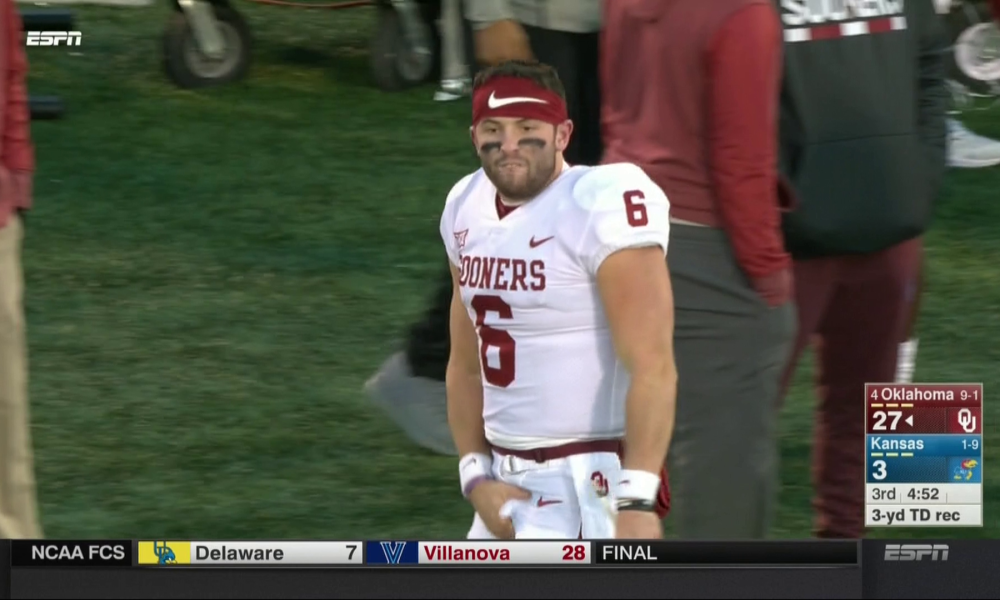 After some very offensive antics against Kansas, Baker Mayfield will start out on the bench against the Mountaineers and will not be a captain.

Keep in mind this is senior day for Oklahoma and Mayfield will not be out there with the guys for the final time as captain.

“This decision was difficult,” said head coach Lincoln Riley. He was obviously having a very difficult time with this as he was silent for several seconds.

In case you missed what Baker Mayfield did against the Jayhawks, it’s definitely worth a look. It’s hard to remember a game where this guy lost his cool this badly on the sideline. Clearly he knew he was on camera, but it didn’t matter. He grabs his crotch and yells “f*ck you!” at the Kansas sideline.

At this point Mayfield is running away with the Heisman. On Saturday night he apologized to reporters and also apologized on social media.

“I got caught up in a competitive game, a chippy game, but what I did was unacceptable,” Mayfield said. “I apologize. It’s disrespectful. It’s not the example I want to set. It’s not the legacy I want to leave at OU. I truly do apologize. Thinking about the kids that are watching this now, it’s not something I want to do to the parents out there. I’m sorry.”

What do you think this is going to do to his draft stock? NFL scouts are going to start seeing a lot of Johnny Manziel after a move like this.

Don’t forget Mayfield ran to the 50-yard-line at the Shoe and stuck his flag in the ground after the Sooners took down the Buckeyes. Then his led his team in a dance.

So what exactly triggered Baker Mayfield? Before the game the Kansas captains refused to shake hands with Mayfield. Not a classy move, but it in no way warranted Mayfield to go off like he did on the sideline. Perhaps there is more to the story we are not aware of.

What do you think about what went down? Should Baker Mayfield be suspended for the entire game due to his actions or is this a big deal out of nothing?