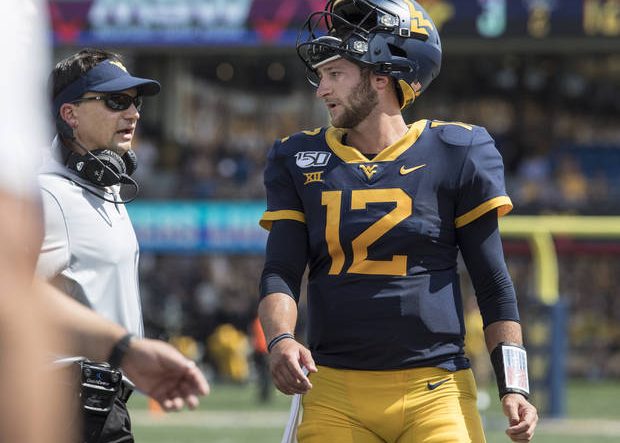 Preface:  To begin, if Neal Brown was going to start Trey Lowe, the Redshirt Freshman Quarterback, this Saturday against the Oklahoma Sooners, he would not admit it.  Tony Caridi, dripping with professionalism, asked about Austin Kendall’s injury on “The Neal Brown Show” and Brown, backed into a corner, answered the only way that he possibly could have:  “Barring any changes, Austin Kendall will be under center on Saturday.”

What did you expect him to say?  If he were to say that Trey Lowe would be the starter, that would give the Sooners time to prepare for all that he brings to an offense.

With that said, there is a chance that Austin Kendall is fully recovered and will be 100% by game time on Saturday.  This is a huge game for Kendall as he returns to Norman, Oklahoma, his home for the first three years of his college career.

Neal Brown’s loyalty to Austin Kendall makes perfect sense.  After all, Kendall is “his guy.”  When Kendall decided to transfer from Oklahoma, a rival conference team, to West Virginia, it was a major splash for Brown at the very beginning of his time as the Head Coach of the Mountaineers.

For Brown to pull a 4 star recruit who almost beat out eventual Heisman Trophy winner Kyler Murray as the starting quarterback the previous year from the Oklahoma Sooners was a massive get for the new Head Coach.

Allison is/was a serviceable backup who wouldn’t challenge Kendall like Lowe would/could.  Benching “his guy” for a Redshirt Freshman during a down year never made sense to Brown.  This would look terrible for him and to future potential transfers who were considering transferring to West Virginia.

Brown may not feel that Lowe is better, or he may feel that even though Lowe is a better option, that the team surrounding him isn’t good enough to win anyway.  Neal Brown is a tremendous coach and is even better at building teams, and his loyalty to Kendall is much more about building the team than talent.

Trey Lowe outplayed both Austin Kendall and Jack Allison by a mile in the team’s Gold-Blue Spring game; Lowe showed tremendous accuracy and zip on his passes, and unfortunately was not able to show what he could for the running game due to quarterback contact restrictions during the scrimmage.

During the same interview that Brown announced that Kendall should be ready to play against Oklahoma, he added in response to a question about playing a “mobile quarterback”:   “We’re evaluating all things.  We’re always looking for solutions.”

While Lowe may still not get his opportunity at Oklahoma, there is far more behind Brown’s decision than simply who gives the Mountaineers’ offense the best chance – Brown will remain loyal to Austin Kendall because this is part of his process, his “climb.”  Remember, this is the same Neal Brown that said Austin Kendall “did some great things” and “it was his best game” after throwing 4 interceptions against a mediocre Texas Longhorns’ secondary.

I would like to see Trey Lowe play because I think he gives the Mountaineers the best chance to win and I also don’t think this is a lost season.  At 3-3, West Virginia could still conceivably make it to a bowl game with an improved offense and a spark.  That spark is Trey Lowe.